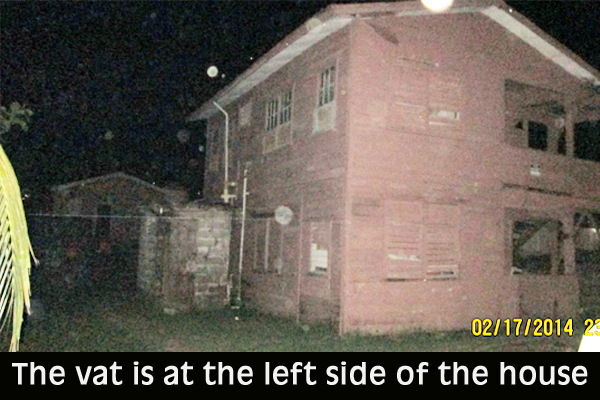 The family of popular city taxi driver Lester Rowland, 61, well known as “Tin Man,” of Guerrero Street, is mourning his death after his body was found in an advanced state of decomposition in a cement vat in their yard.

The horrible discovery was made about 5:30 this afternoon shortly after his brother, Steven, made a missing person report to the police.

Steven Rowland told Amandala that his brother had not been seen since Friday, February 7, but their mother told him that she saw him on Friday, and they have been looking for him since.

However, this afternoon, the family was informed that his car was bogged in the Krooman area of Fabers Road. They went to the area and saw the car, but Rowland was nowhere to be found.

Steven then reported him missing to police, who began a missing person investigation.

Steven told Amandala that they were going to his house to begin the search, and when they looked in the metal vat, his decomposing body was discovered.

Attempts were made by police to take him out of the vat, but the efforts were unsuccessful, and tomorrow, another effort will be made to get him out. Two policemen were detailed to secure the area.

Due to the advanced state of decomposition, it is expected that he will be buried at the site of the autopsy.

Steven is at a loss for a reason why his brother was killed, because he had no known enemies, he said. He wants to know how he was killed, where and why.

Steven Rowland said that his brother kept to himself. He was a deportee from the United States since February, 1991, and could take care of himself, but he was friendly and approachable. He was also known as “Doggy,” said his grieving brother, who added that it is really hard to see his brother in that state, but they are trying to cope.

Rowland is the father of three children and he is also survived by his wife.