Home Highlights Teachers from the South rally in ‘Griga
Highlights

Teachers from the South rally in ‘Griga 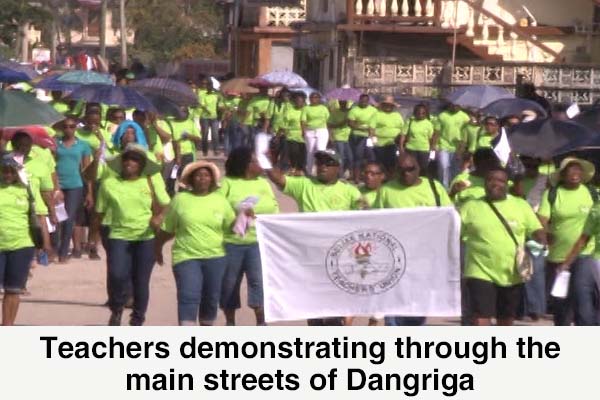 The BNTU says it is their greatest rally against, among other things, Government’s “cycle of corruption”

The fifth in a series of nationwide rallies organized by the Belize National Teachers Union (BNTU) was held today in Dangriga, and the teachers from the southern part of the country made sure that their voices were clearly heard as they continuously raged on about current national issues and condemned the Barrow administration for what they call “rampant corruption” within the Government.

Before the rally, the seemingly jubilant teachers – led by the Stann Creek Branch of the BNTU – marched and chanted through the main street of Dangriga to the beating sounds of Garifuna drums, heartily singing their union theme songs.

The sequence of rallies has arguably peeved the Prime Minister, Hon. Dean Barrow, and the Minister of Education, Hon. Patrick Faber, who have both received the brunt of the teachers’ furor. Faber has publicly said that he cannot comprehend why the teachers are rallying, since according to him, the negotiations for their salary increase – which is a part of the reason for the rallies – had not broken down.

Minister Faber threw “fuel on the fire” when he pointedly accused the Stann Creek teachers of changing the date of the rally from the usual Friday to today, Thursday, so that they could get a 2-day vacation from school. That sentiment was echoed by Prime Minister Barrow and that was enough grounds for today’s rally to take on an even greater significance.

Those charges were viewed as an insult by the Stann Creek Branch of the BNTU, and yesterday – in an interview with KREM News – unfazed branch president, Nadia Caliz, made a public appeal to teachers in that district to show up in their numbers to signal to the Government that they (GOB) need to break the “cycle of corruption.”

Today, the teachers did just that, and came out in throngs for what has been called the most successful and most energetic of all the rallies held by the BNTU so far.

According to Caliz, practically all of the more than 500 teachers who are registered in the Stann Creek Branch were present at today’s rally.

One of those teachers, Troy Coleman, paid utmost respect to his colleagues for coming out and proclaimed that teachers are some of the most important citizens, because they are an instrumental part of the building of a nation.

Guest speaker for the event was a former police officer-turned-activist – Earl Lewis, who now refers to himself as Ifiene Chineke Diozeh. He gave a speech which was tinged with spiritual references and blamed a chronic lack of visionary leadership as the basis for our country’s problems.

Meanwhile, Nadia Caliz affirmed that the BNTU is not rallying solely for a salary adjustment, and accused the Government of trying to distort the facts.

President of BNTU, Luke Palacio, who was scathingly criticized by PM Barrow, responded to Barrow’s statements today. Palacio said, “The Prime Minister has called me a “wind-up doll.” Well, the message to him is this – that I am unwinding, and because I am unwinding, he has to deal with me, and he will continue to deal with me and the BNTU, because this train is not going to stop!”