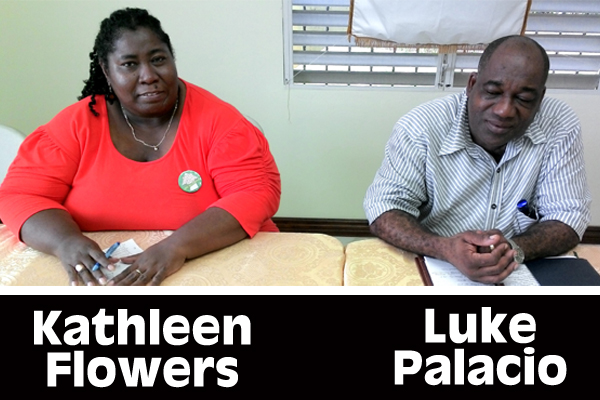 The Belize National Teachers’ Union (BNTU) declared today that it takes “great umbrage” with what it said was a unilateral announcement by Prime Minister and Minister of Finance Dean Barrow, indicating that Government would push back the date for the payment of a long overdue salary adjustment to teachers and public officers, from July 2014 to August 2014.

The BNTU made its stance known at a press briefing held at its Belize City headquarters on Monday morning, January 6, 2014.

The BNTU also expressed concern that the negotiations have been dragging on for far too long. BNTU’s national president, Luke Palacio, said that their last negotiations, which began with their first face-to-face meeting with Government reps in 2009, were held in July 2013 and they will now push for talks to be concluded by mid-year, 2014.

“If we have to get to industrial action, well, let’s roll it out…” said Kathleen Flowers, the BNTU’s 2nd national vice president and chair of the BNTU’s PR committee.

Flowers said that 2014 should have brought a happy state of resolution for the nation—but not so. She said that while they plan to urgently address the salary adjustment issue, there are myriad other issues that the BNTU hopes to tackle; foremost is the corruption which she said has sickened the country.

Flowers said that they are now embarking on a public relations campaign, and the slogan people will be hearing is, “Teachers got yuh back!”—a pledge that teachers will be backing the nation in efforts at “getting the nation turned around” and “getting rid of the scourges that are hurting this nation, and people bleeding us dry” while looking us in the face when doing it and telling us that they are not doing it.

Flowers said that the Penner Passport Scandal will be among the top priority issues they will tackle. She said that the BNTU has publicly called for a full investigation, and this, she said, would be bundled with all the other national issues “so that people start to see how big the pie is that is being baked… with all kinds of minced meat in there…”

She said that alongside the umbrella organization, the National Trade Union Congress of Belize (NTUCB), they will address “all national issues that are hurting us everywhere we turn” and they “won’t let any issue rest this year – starting with corruption!”

“The union is about to start taking the medicine to the nation,” she commented.

The BNTU is insisting that the Government agrees with them on a “floor” or minimum salary adjustment—a proposal to which Palacio said Barrow has been opposed. The BNTU president said that Government should assure workers that they would get a minimum 5% salary adjustment yearly for the next three years. However, he said, they are calling for continued negotiations on this point.

“You cannot just come and tell us no!” Palacio asserted.

Flowers said that, “No longer will we sit by and let the powers that be do things their way!”

Palacio explained that in layman’s terms, what should happen is, if Government collects $30 million more this year than it did the previous financial year, they would be sharing $15 million; but, he noted, the dollar has diminished and they are only trying to catch up on worth lost since 2005—not being greedy, as some have alleged.

Palacio said that they have been able to calculate that the dollar has lost close to 35 cents in value since their last salary adjustment.

He also said that the formula the Prime Minister gave for calculating the pay raise is not the formula that they had discussed. According to Palacio, the raise would be calculated based on the difference between what Government collected in the April 2012 to March 2013 financial year, and what it collects in the April 2013 to March 2014 financial year, whereas the impression had been created that the adjustment would be paid on additional revenue for 2013-2014, which had not been budgeted for this year.

In his New Year’s Day message, Barrow said: “The formula is that the public servants will get 50 cents out of every additional dollar of recurrent revenue (over the agreed base year) which Government collects.”

He added that, “As of December, those recurrent revenues were up significantly over original projections and this trend is expected to continue through the end of the financial year. Thus the preliminary estimates are that—when coupled with the annual 2% fixed increments that this administration restored—the raise for all those paid by Government will be substantial.”

Palacio said that whereas the Prime Minister had indicated in his New Year’s message that the “substantial” salary adjustment would take effect August, retroactive to April 1, 2014, that was not the agreement he had with the unions. Palacio said that the agreement, so far, is for the salary adjustment to become effective on July 1, retroactive to April 2014.

He said that they take great umbrage and are very much concerned that the Prime Minister would use his New Year’s message to send what they consider to be a wrong signal, after the BNTU, and the Association of Public Service Senior Managers (APSSM) and the Public Service Union (PSU), had been negotiating with the Government in good faith.

Asked whether they have tried to clarify whether the Prime Minister made an error when he said that the adjustment would be paid in August, or whether he really meant what he said, Palacio said that Barrow should be responsible for what he has said. We note that back in November 2013, Barrow did tell journalists that the salary adjustment would be effected in July 2014.

In February 2013, Barrow told journalists that “if the recurrent revenue goes up over the benchmark year—fifty percent of the extra revenue collected will go to the teachers and public officers by way of a raise. Why fifty percent? Because that is the current ratio of salaries to recurrent revenue.”

For those who may be questioning why the big fuss about a month’s delay in paying the salary adjustment, Flowers said that teachers “only have six months’ waiting tolerance,” and any changes in the agreement would result in a loss of confidence.

Flowers said that teachers are particularly concerned, because they only get paid once a month; and August could very well mean end of August, with the increase being paid in September – which would then amount to two months’ delay beyond the promised date.

According to Palacio, it was the Government which had indicated in February 2013 that it would need time to confirm the budget outturn figures, in order to decide how much salary adjustment should be paid to teachers and public officers. It was the Government that had proposed July 1, 2014, as the effective date of the adjustment, he added. Palacio said that Barrow needs to now clarify why he is saying August.

The BNTU president said that they had been very patient, ensuring that members try to keep calm, but when it would appear that the Prime Minister now wants to move the goal post they feel very much offended, he said.

Palacio also addressed the Prime Minister’s comments that the salary adjustment, when added to the 2% annual increment, “will be substantial.”

According to Flowers, the 2% increment for some teachers translates, in some cases, to a mere $56 for the year – with 25% of that increase going back to the Government in the form of taxes. Flowers said that the increase by no means offsets the hundreds of dollars that teachers spend each year to prepare classroom aids and purchase equipment and supplies, such as projectors, because neither managements nor Government provide funds for them to do so.

According to Palacio, not all teachers end up qualifying for an increment, and open vote Government workers do not get increments.

Signaling that they will not take things lying down, Flowers announced that teachers will promote the wearing of neon green on specific days on which they will advocate for particular issues, beginning this month.

She said that they will be doing media rounds to share their intentions and bring all parties and stakeholders on-board.

Thereafter, she said, they will step up the game, as it relates to salary adjustments: “If we have to go the whole nine yards, we have some good ballplayers; we will run the field!” Flowers said.

On Friday, January 17, the rally moves to Belize City and on January 24, the three Cayo branches – Belmopan, San Ignacio and Benque – will host their rally.

Finally, on Friday, January 31, the southern branches of Stann Creek and Toledo will hold their rallies.

Flowers said that they are calling the public and sister unions to join, to make the thrust forward to ensure that the salary adjustment is realized in July—not August!

Palacio also said that during 2014, they would also be advocating for changes in Social Security benefits for teachers. He said that one change that needs urgent attention is the extension of accident coverage to include teachers traveling to and from work, because the current provisions only permit benefits to be paid if the worker uses a vehicle provided by their employer – which is hardly ever the case with teachers.

Amandala tried to reach Prime Minister Barrow on the issues raised by the BNTU; however, at the time of this report, we had not received a reply from him.