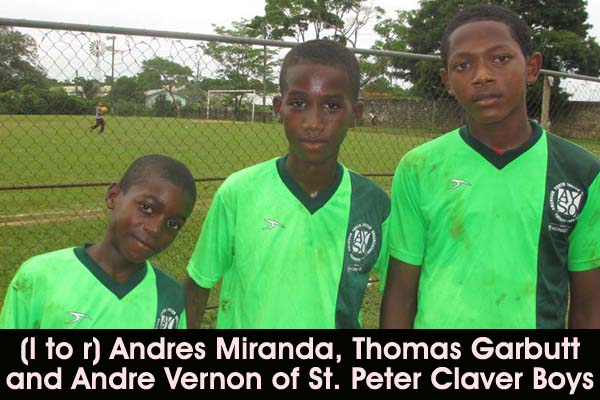 On Tuesday afternoon, June 3, two games were played at Columbia Field and one at Golden Stream Field. In game 1 at Columbia Field, San Pedro Columbia Boys blanked Forest Home Methodist Boys, 3-0, with goals from Gabriel Che (5’), Ramon Tesecum (20’) and Gilbert Chiac (29’); and in game 2, San Pedro Columbia Girls won by the same score, 3-0, over Forest Home Methodist Girls, with goals from Jocelyn Coh (13’ & 25’) and Kaisy Thimbrel (28’). In the only game at Golden Stream Field, Indian Creek Boys played to a 2-2 draw with Golden Stream Boys. Andres Rash (5’ & 35’) struck twice for Indian Creek, while Darren Cal (11’ & 32’) did the same for Golden Stream.

Only 3 of 4 scheduled games were played today, June 5. In game 1 at Toledo Union Field, Seventh Day Adventist Boys won, 3-2, over PGT Methodist Boys. Jayron Arzu (10’ & 18’) and Joash Ramirez (31’) shook the net for Seventh Day Adventist, while Carlen Ramclam (9’) and Lazarus Barrientos (20’) tallied for PGT Methodist. Game 2 between St. Peter Claver Girls and Seventh Day Adventist Girls was not played; St. Peter Claver Girls lost by default. Meanwhile at Big Falls Field, the first game saw Golden Stream Boys with a 2-0 win over Big Falls Boys, with Darren Call (36’ & 39’) scoring both goals for Golden Stream. And in the nightcap, it was Big Falls Girls, 1-0, over Golden Stream Girls, on a goal from the penalty spot by Kelyn Supaul (PK 35’).

The games scheduled for tomorrow, Friday, at Trio Field have been postponed due to other school activities.