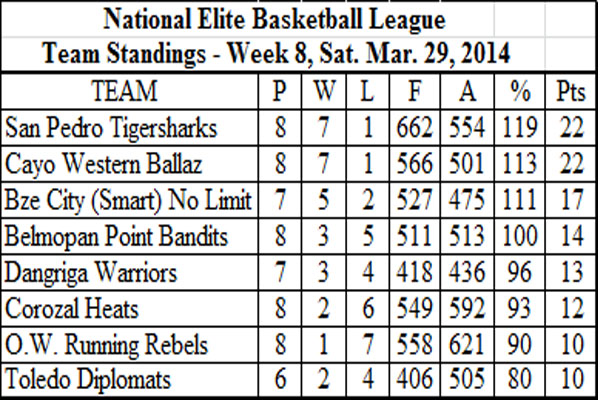 After Week 8 games in the inaugural National Elite Basketball League tournament, involving 8 teams from across the country, the San Pedro Tigersharks and the Cayo Western Ballaz are tied with 22 points at the top of the standings. Belize City (Smart) No Limit and Dangriga Warriors each have a back match pending, and Toledo Diplomats have 2 back matches remaining.

In weekend games, on Friday night, Belize City (Smart) No Limit travelled north to Orange Walk and came away 1 point winners, 76-75, over home standing Orange Walk Running Rebels; all other games were on Saturday, and the scores were all lopsided. In Corozal Town on Saturday, visiting San Pedro Tigersharks won, 86-68, over Corozal Heats; in Dangriga, the visitors were again successful, as Cayo Western Ballaz were 61-48 winners over Dangriga Warriors; and in Punta Gorda, it was the visiting Belmopan Bandits blowing out the Toledo Diplomats by an 86-41 score.

At the completion of the double round-robin regular season (14 games each), the top 4 teams go on to the semifinal playoffs.

Fans can see scores on-line during the course of the games at the link below: