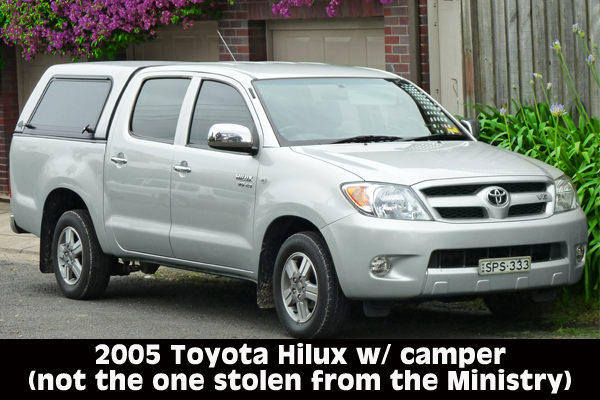 The Ministry of Health has been reeling from allegations of misconduct and mismanagement by some of its senior officials in the past few weeks, but, amidst the successive “black eyes”, the Ministry is also seeking to locate one of its vehicles, which was reported stolen since last Thursday, May 8, from out of the Ministry’s compound.

The Ministry has reported to police that a 2005 4-cylinder silver diesel Toyota Hilux pickup truck was stolen from the Ministry’s parking lot in Belmopan in the early hours of Thursday.

The truck reportedly has a camper and the word “HECOPAB” is labeled on the two front doors.

Anyone who knows the whereabouts of the 2005 Toyota Hilux belonging to the Ministry of Health is asked to contact the nearest police station.

Exactly two years ago, in May of 2012, a gold 2009 Toyota Hilux was stolen in the wee hours of the morning from the Central Health Region’s compound, located at the old Nursing School, next to the Karl Heusner Memorial Hospital in Belize City.

The entire incident unfolded under the watch of the Ministry’s surveillance cameras, and the Hilux was recovered about two weeks later, and three persons, including a police officer, were charged after police conducted a sting operation and allegedly caught the men trying to sell the vehicle.

In December of 2011, another pickup – this time a Mitsubishi L200 – was the stolen from the Western Regional Health Office, but that one has not been recovered.