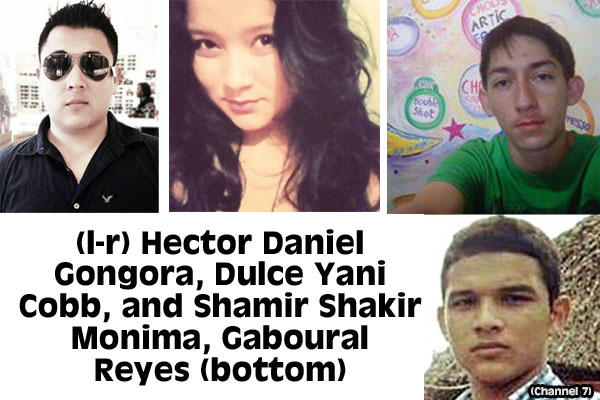 Three separate road traffic accidents over the Christmas week, between Saturday, December 21, and Thursday, December 27, claimed the lives of 6 people.

The most tragic of the accidents happened on the Philip Goldson Highway on Christmas Day, December 25, when four young people lost their lives after the vehicle they were traveling in careened into a tree.

The night before, on December 24, Armin Nair Rodriguez, 22, of Calcutta Village, Corozal, was knocked down and killed.

Two days earlier, on December 22, Victoria Bol, 42, a mother of 5 children and resident of Silk Grass Village, Stann Creek, succumbed to injuries she sustained when the vehicle she was in collided with a police van and overturned.

This past weekend, Gongora, Monima, and Cobb, who died on Christmas Day, were buried, after a joint church service at the Divine Mercy Church on the Philip Goldson Highway.

Police said that at about 4:30 p.m. on December 25, Gongora was driving a four-door pickup truck from Belize City to his home in Lake Gardens. His three friends, Monima, Reyes and Cobb, were with him when he lost control of the vehicle between Miles 7 and 8 on the Philip Goldson Highway, near the former Williams sewing factory.

The pickup reportedly slid over to the left side of the road and slammed into a tree, trapping the four occupants inside. Rescuers had to cut the vehicle to retrieve their bodies.

All the occupants of the vehicle were taken to the Karl Heusner Memorial Hospital, where they were pronounced dead on arrival, at about 5:30 that same evening.

Dr. Hugh Sanchez – who conducted a post-mortem on the bodies between 7:00 a.m. and 2:00 p.m. on Boxing Day, Thursday, December 26 – certified that Gongora died from severe brain injury, and facial and skull fractures; Reyes died from traumatic shock syndrome, and chest and abdominal injuries; Cobb died from avulsion of the head and neck; and Monima died from severe head and liver injuries.

Superintendent of Police Chris Noble, Commander of Ladyville Police Station, said that they are investigating from all angles in trying to determine the cause of the accident, which likely included bad road conditions. Noble stressed the need for drivers to be careful on the road.

A neighbor of Monima and Cobb, residing on Daly Street, told Amandala that the four persons were like relatives. At about 2:30 p.m. on Christmas Day, Gongora picked up Cobb and Monima from their home, to take them to Ladyville. Shortly afterwards, family and friends received the tragic news that they had died in the accident.

Omar Gongora, the father of Daniel, also known as “Danny,” told Channel 5 in an interview that his son had travelled home from Houston, Texas, where he had been studying electronics and computer engineering technology at the University of Houston. He was to return to school this week, after the holidays, to resume his studies.

The grieving father said that his son and his sister arrived home about 3:00 a.m. on Christmas morning, and about 10:30 that same morning, Danny washed the pickup truck and went out in it. When his father called his phone, there was no response. Shortly after 4:40 p.m., he got a call from his other son informing him that his vehicle had been involved in a collision.

The father said that he instantly thought of Danny, who was driving his pickup. He and his wife immediately went to the accident scene, to see what was happening. Gongora said two bodies had already been taken out of the vehicle and placed on the ground. Then his son was retrieved from the wreckage, after which the last body was taken out.

The Ladyville fatalities happened only hours after another fatal accident in northern Belize. At about 9:30 on Christmas Eve night, Armin Nair Rodriguez, 22, the eldest of 8 brothers and sisters, was knocked down and killed on the spot, between Miles 79 and 80 on the Philip Goldson Highway. Rodriguez was riding his bicycle in San Joaquin Village, Corozal.

After the accident, he was rushed to the Corozal Town Hospital, where he was declared dead on arrival.

Police have since arrested and charged Luis Noriega, 34, also of San Joaquin, and charged him with manslaughter by negligence, causing death by carless conduct and driving without due care and attention.

Police said that when they arrived at the accident scene, they found Rodriguez, a laborer of Calcutta Village, lying face-up in a yard, off the right hand side of the road.

Police said that their initial investigation revealed that Noriega was driving a black 1998 Ford Ranger pickup from Corozal Town towards Libertad Village, with two other San Joaquin residents. Rodriguez was reportedly making a U-turn in the road when he was knocked down by the pickup, and died on the spot of serious head injuries.

Police impounded Noriega’s Ford Ranger pickup for inspection, and took urine samples from him for analysis. They also detained Noriega and later charged him for Rodriguez’s death.

According to CTV 3 News, Rodriguez was planning to visit friends and family in the village for the Christmas. He had told his mother that he was going to buy a quart of rum in the village to share with his cousins and the rest of the family. Shortly afterwards, the family received a message that he had been knocked down and killed. They all rushed to the scene.

While that family is grappling to cope with their tragic and sudden loss, so is the family of Silk Grass villager – Victoria Bol, who died following a collision in front of the National Bank in Belmopan on Saturday morning, December 21. She has since been buried in her home village of Silk Grass.

According to police, Dion Dawson, 35, a construction worker of Santa Elena, Cayo, was driving into Belmopan and upon reaching in front of the FFB Stadium, he lost control of his pickup, slamming into the side of a white 1999 Toyota Sirenna van, which belonged to the Police Department.

Police said that when they arrived on the scene, they saw the pickup with “three wheels up, as the left front wheel was broken off and was extensively damaged.” Bol, who had suffered head and body injuries, was trapped inside.

Bol was extracted by rescuers and rushed to the Western Regional Hospital but died there while undergoing treatment. She was declared dead at about 1:48 a.m. on Sunday, December 22.

Another passenger in Dawson’s pickup, Adrian Pate, 32, of Hopkins Village, had received a cut wound to his right hand, and he and Dawson complained of body pains.

Police announced that both drivers, Arnold and Dawson, have been issued with notices of intended prosecution, and they have launched an investigation into the tragic collision.