Tragedy averted at Belize Western Gas on the Western Highway 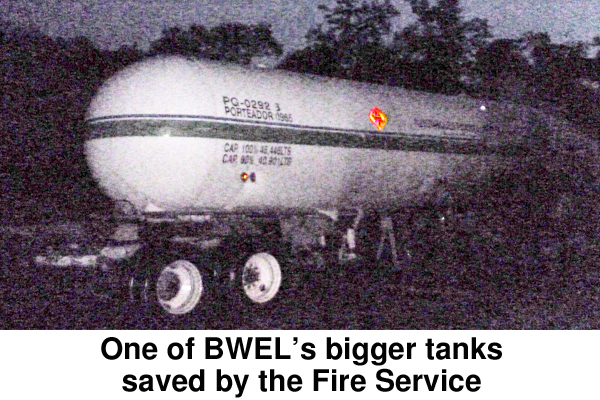 A butane storage tank caught fire and exploded, putting the other storage tanks in danger of exploding

A butane storage tank caught fire and exploded, putting the other storage tanks in danger of exploding

One of four butane gas storage tanks exploded this evening around 5:10 in the Belize Western Gas Company compound at Mile 4 on the Western Highway, and there was great concern that the resultant fire would spread to other, larger butane tanks, which would have been a major catastrophe for the people of the area and the adjacent Bravo Motors.

However, quick response by the Belize Fire Service averted the tragedy. They arrived in time to cool off the tanks with water, and they also locked off the valves.

Auri Diaz, the manager of the Belize Western Gas Company, told Amandala that the fire began at the pump house when a wire on the compressor in the pump house got overheated and caught fire, and the flames quickly spread to the tank. She said that they had received a large shipment of butane gas and were unloading it to the storage tanks when the incident occurred.

Witnesses from nearby Bravo Motors who saw the flames spreading to the tanks told us that they alerted the workers that the tank was on fire, and the workers ran, leaving the flames to spread. Two of the workers ran into the swamp behind the compound, and another two scaled the fence to escape. The witnesses said that one of the tanks then exploded.

A Bravo Motors employee quickly called the Belize Fire Service, and meanwhile, the Belize Western Gas employees moved one of the nearby tanks, but another tank had already caught fire when the firemen came and began to cool off the tanks.

Andrew Nunez, Training Officer for the National Fire Service, said that they received the call around 5:15 p.m. and reacted immediately, and on their arrival, saw flames under the two tanks. They quickly put out the flames, turned off the valves and saturated the tanks to cool them off.

Bravo Motors moved their vehicles to a safe area and traffic was blocked on the Western Highway for a while.

An investigation has been launched by the police and the Belize Fire Service.

Diaz said that presently, the loss to the company has not yet been ascertained.