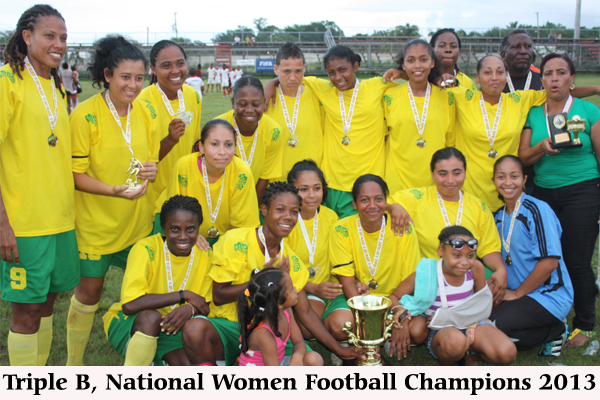 The decisive Game 2 of the Atlantic Bank National Women’s Football Championship 2013 at the FFB Stadium in Belmopan on Saturday, September 7, was far from the tight contest in Game 1 a week earlier at the MCC in Belize City, where Triple B and Ladyville Jaguars played to a nil-nil stalemate. It was predicted to be an uphill battle for Ladyville in the return match, after one of their big stars, Shanell Gentle, had received a red card in Game 1; but, as it turned out, the Ladyville squad was also without their star defender Sarah Arzu in Game 2, as she had a mandatory training date with the Coast Guard, so the Jaguars were without their two best players.

The clear underdogs, Ladyville battled gamely, but it was only a matter of time before they succumbed to the Triple B attack, led by national champion sprinter Kaina Martinez. And it didn’t help when another Ladyville star player Kara Kisling went down with a knee injury and had to be taken to hospital. The final score was 8-0 in favor of Triple B, with the fleet-footed Kaina netting 4 goals (14’, 37’, 45’ & 71’), talented midfielder Miriam Villamil scoring 2 (16’ & 79’), and Jennisha Scott (53’) and Rosebell Ogaldez (88’) adding 1 goal apiece for the winners.