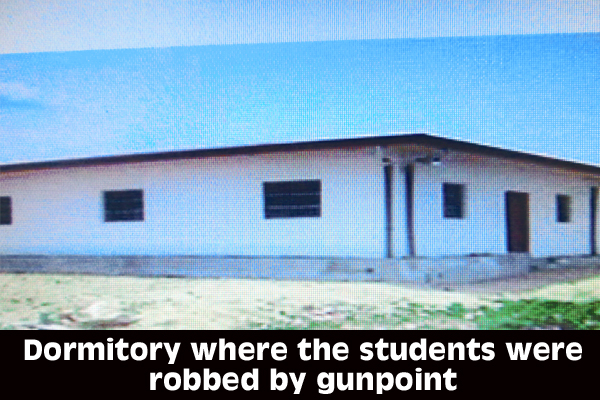 Nine students at the University of Belize’s Belmopan campus were terrorized by six armed, masked gunmen who pointed guns at them, tied them up and robbed them in their dormitories on the UB compound in Belmopan.

The students, members of the Student Athletic Scholarship Program and international students from the English as a Second Language Program, including some from Mexico and Trinidad, could not alert anyone because the gunmen ordered them to lie flat on the floor and not make any noise.

One of the students was beaten with a pistol on the head, and the students were robbed of cash and other items totaling $41,000 in value. The armed robbers stole laptop computers, iPods, cell phones, jewelry, cash, watches, and other valuables, then escaped. The incident occurred about 8:40 on Wednesday night, May 8.

The students told police that they were in their dorm rooms when the six masked men, armed with handguns and a shotgun, came into their dorms, pointed guns at them and took them into the hall area, where they were all tied up. The thieves then went into their rooms and ransacked them. After stealing what they wanted, they ordered the students to lie down on the floor and keep quiet.

Police on patrol did enter the compound during the robbery, but the students did not alert them until about 20 minutes later, when they were sure that the bandits had departed. Police searched the area, but the thieves, by that time, were nowhere to be found.

The students told police that the thieves were six Hispanic men, short and of medium build, and they were all dressed in black clothing; their faces were covered with masks, and they wore gloves.

The students said that at the time of the robbery, there were no UB security officers in the area.