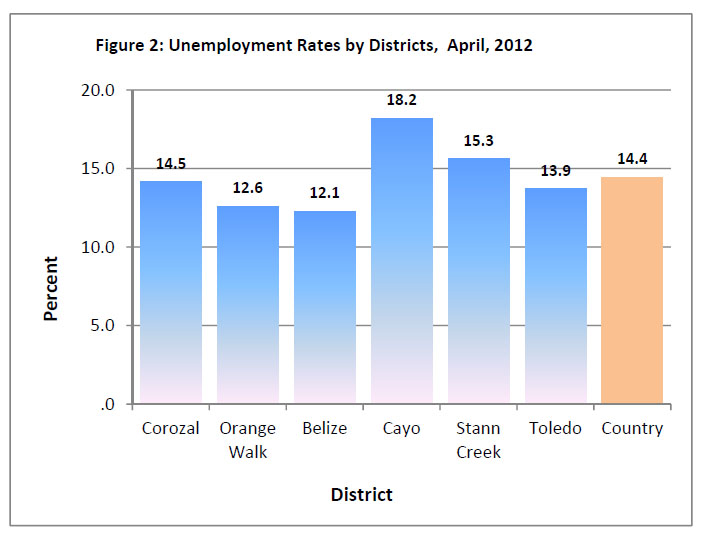 Half the labor force not literate, survey says

The Statistical Institute of Belize (SIB) targeted 2,800 randomly selected households countrywide and got responses from about 85% of them. The survey is based on data from 9,980 respondents.

The unemployment rates are higher than any recorded over the past decade – 2002-2012, when the rate spanned 9 to 13%. In fact, according to the SIB, “these are the highest unemployment rates that Belize has experienced since April 1998 when the national rate was 14.3 percent, with similar percentages of males (10.6%) and females (21.3%) being out of work.”

“Compared to April 2007, it is noteworthy that the unemployment rates in April 2012 were higher in all districts except Toledo,” said the survey report.

The Belize District recorded the lowest unemployment rate at 12.1%.

The employed population totaled 126,722 in April 2012; 57.2% were employed by private businesses and other non-government entities and 12.3 percent by the public sector, while 26.7 percent were self-employed and 3.6 percent were unpaid family workers. An estimated 78% were born in Belize, 10.3% in Guatemala and 1% in Mexico.

The median monthly income per worker was $886, 14% higher than five years ago, when it was $772. A total of 21,371 people in the labor force were unemployed and being supported either by a parent, spouse or child.

Almost a half (45.9 percent) of the unemployed labor force has been without work for more than twelve months. Of those who worked before, almost three-fourth (73.2%) previously worked in the services sector.

The survey summary notes that females experience longer periods of unemployment than males. According to the data, “about a half of females (51.3 percent) have been unemployed for more than twelve months compared to about a third of males (36.7 percent).”

“Since only about one fifth of the country’s total population are youth, it is clear that this age group is overrepresented among the unemployed,” said the survey summary.

The survey summary said, “…it is clear that at least 45.9 percent of the labor force is not literate.”

It noted that about half of Belize’s work force (more than 60,000 people) has no education and about 1 in 3 have completed only primary school. Meanwhile, 12% have completed up to high school and 6% tertiary education. Forty five percent of the 126,722 employed persons have no education, said the report. Additionally, within the employed labor force, almost three-quarters have at most a primary school education.

As of April 2012, the Maya have an unemployment rate of 18.6 percent, which is slightly higher than the rates of the Garinagu (17.4 percent) and the Creole (16.2 percent). In the Hispanic town of Orange Walk, Creoles experience their highest rate of unemployment – 29.6%. Meanwhile, Mestizos recorded the lowest unemployment rate (13.6 percent), according to the survey.