Unfinished business; nobody safe in game 2 of PLB semifinals 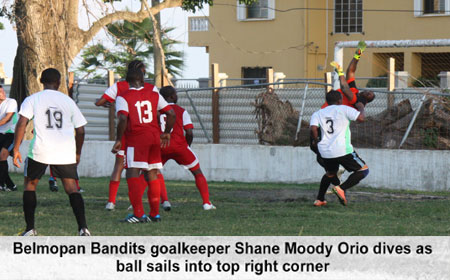 BELIZE CITY, Mon. Dec. 12, 2016–Although the odds are decidedly in favor of defending champions Belmopan Bandits at home this coming Saturday night on their carpet field at Isidoro Beaton Stadium, it is not yet “signed, sealed and delivered,” not when FC Belize poses a question in Mexican striker Hector Martinez, that the Bandits have not yet adequately answered. Repeatedly roughed up at the MCC yesterday by veteran Bandits flank defender Ian “Yellow” Gaynair, Martinez nevertheless brought a lot of pressure on the Bandits, and a better playing surface will help him to be more effective. A long hard free kick towards the southern goal from the left side by FC Belize captain Matthew Leal seemed within the radar of Bandits sublime goalkeeper Shane Moody Orio, but the ball was artfully deflected mid-flight by the head of Martinez as it entered the eighteen, and it sailed just out of reach of a diving Shane, and settled into the right top corner of the net at the 34th minute for the FC Belize 1-nil lead.

And in the same goal in second half, Bandits veteran striker Jerome “Jarro” James utilized his height to his advantage, and outjumped the FC Belize defense after a long corner from the west side at the 75th minute, sending a perfect header down inside the eastern goal post; 1-1 ball game.

FC Belize seemed to have the better of the chances in first half, but the Bandits regrouped and stole the action for a spell in second half, until FC Belize re-energized their midfield with a couple substitutions.

The teams are very well matched, and, though the Bandits have the advantage on their home turf, FC Belize will not be counted out easily on Saturday night.

Meanwhile, early reports from the Norman Broaster Stadium in San Ignacio, were that Police United had jumped to a comfortable 3-nil lead over BDF. No team had scored more than 2 goals against BDF all regular season long. Carlton “Fubu” Thomas opened the scoring for Police at the 22nd minute, and Danny Jimenez (38’) and Byron Usher (49’) increased the lead, before BDF’s Shane “Chucky” Flores came to life in injury time (91’) to keep the army at least within striking distance in their return match this coming Sunday.

For Police United, things seem to have been going right since the arrival of their new coach, the very familiar Palmiro Salas, who is known to have an eye for talent. Fubu has scored in three straight games for Police United, and it would appear he is unstoppable right now.

For BDF, it is a good sign that Chucky Flores just got on the score card. Quick and strong in attack, a confidence builder might be just what Chucky needed to fulfill his potential in the BDF attack.

This Sunday afternoon, BDF will be at home at the MCC, where they haven’t lost this season. 3-1 is hard, but not insurmountable. 3-nil would have been much worse. Thanks to the “never say die” attitude of the BDF soldiers, one goal this Sunday would put them within striking distance of tying the aggregate score. Yesterday at the Norman Broaster, BDF may have been a little in awe of their former coach, Palmiro Salas, who led them to two championships a few years ago (2010-2011). But come this Sunday, coach Jerome “Jeje” Serano will be all about returning the favor to his former teacher.