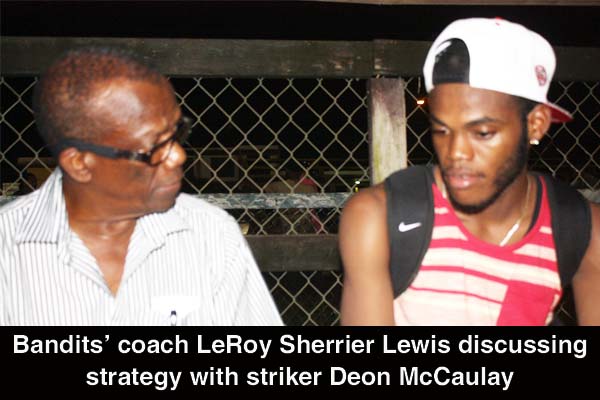 Their first meeting in Week 1 of the PLB Belikin Cup Opening Season 2013-2014 regular season was a 0-0 draw at the MCC Grounds on September 29. Their second meeting on November 16, at the Isidoro Beaton Stadium in Belmopan, sparked a bit of controversy, after FC Belize pulled out a 3-2 victory, and the Bandits management proceeded to protest the match on the grounds of some unpaid fees for yellow cards. The protest was unsuccessful. Except a gross violation of game rules, where there is a perceived unfairness in competition, fans generally prefer to see a victory on the field of play.

After the loss to FC Belize, the Bandits had also dropped a game to San Ignacio United.  Things were looking a bit troublesome for a while, and some Bandits fans tried to rehash the protest talk, but to no avail. Coach Edmund “Buzzard” Pandy appeared to have righted things after a victory over Verdes, but the playoff race already looked tight, and the Bandits ownership was taking no chances, going for “heavier guns” in the person of former national team coach LeRoy Sherrier Lewis. There was no grand turnaround, as the Bandits drew their last 4 regular season games, but it was enough for them to cruise into a secure third place finish in the regular season. Sherrier’s impact may have been felt mostly in the return to form of Deon McCaulay, whose game seemed to have raised up a notch or two. They then disposed of #2 seed BDF handily, with Deon scoring 3 of the Bandits’ 4 goals in the semifinals. It’s the Finals now, and Deon has a score to settle with FC Belize, against whom he was injured in last season’s semifinals. And the Bandits are looking toward a return to the championship crown they wore a year ago in the 2012-2013 Opening Season.

The road was also looking rocky for FC Belize mid-way through this 2013-2014 Opening Season. Owner Lionel Welch had to leave abruptly due to illness, and coach Marvin Ottley had limited time for the team due to other business commitments. Long time supporters of the club saw the need for more support to coach Fred Garcia who took over after Marvin departed.  Brazilian Jorge Nunez, who has spent nearly two decades playing and coaching in the Jewel, brought new energy, enthusiasm and experience to the FC Belize workout sessions, and the pieces began to fall into place, even as the playoff run looked dim in the last few weeks of regular season. But the balance of Fred’s hard line discipline and Jorge’s football finesse, along with some valued assistance down the stretch from Marvin, and the quiet wisdom and resilience of manager Ken Vasquez have all blended with the young playing roster to produce a team that seems to be peaking at the right time. Barely making the playoffs, FC Belize, under adverse circumstances, after trailing 1-0 against Verdes at their home field, somehow emerged 2-1 winners in overtime, and are now ready to try and settle matters with the Bandits.

Forget the protests.  We’re both here in the Finals.  Let’s get it on!