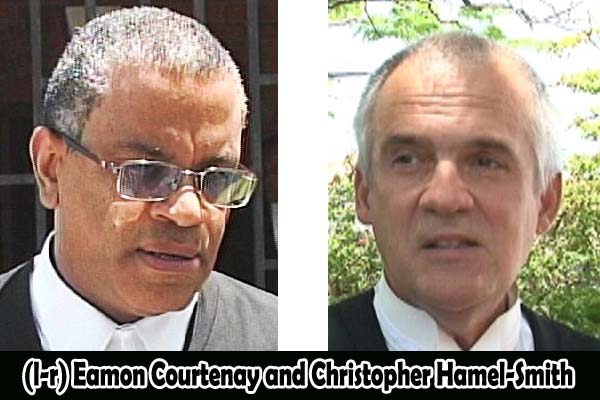 Judgment is expected before August

Arguments came to a close today, Friday, for one of the most impassioned trials in Belize — Caleb Orozco against the Attorney General, challenging Section 53 of the Criminal Code.

Attorney for the churches, Eamon Courtenay, spoke to the media after the trial today and he explained one of the main arguments the defendants used against Orozco’s claim. That is, to start with, that the court was never the right place to which to bring such an issue.

Courtenay said that Orozco, president of UNIBAM (United Belize Advocacy Movement), had no personal experience of being victimized as a result of Section 53 and so his claim had no real value. He said that they understood Orozco’s issue, but disagreed with the way in which he raised it.

“We are understanding of Mr. Orozco’s position and in fact, Mr. Orozco should be praised for having raised this issue,” Courtenay said. “The point is that he has raised it in the wrong forum. The court is not an academic institution. It is not a place where you come and ask for advisory opinions. You have to suffer a [contravention of your] right; you have to suffer a prejudice and when that happens to you then you come to court.”

In his argument, Courtenay objected to the claimant’s use of cases from Singapore, which Courtenay said cannot be relied upon because they are not equivalent to Section 20 of the Belizean Constitution.

“They said that in that case the mere existence of the provision on the law is enough; they don’t have section 20,” he said. “Our section 20 says very carefully that you have to have a right that is being contravened, is likely to be contravened, or has been contravened in relation to you. So it is not an academic question. And if Mr. Orozco cannot prove that the police have threatened him, that they have arrested him, that there’s a likelihood that he’s going to be prosecuted or arrested or somehow prejudiced by this law, then he cannot have standing.”

The case was originally brought to the court by UNIBAM and Orozco later took it on himself to pursue the case. Courtenay said that most of the affidavits in Orozco’s case show issues involving UNIBAM, and not personal attacks on Orozco, making his claims weak.

“Once UNIBAM was struck out as the claimant, it then left Mr. Orozco’s affidavits with very little evidence about a personal prejudice that he was being affected,” he said. “That is the law – whether they made it now or yesterday – that is the law. He has no standing in this claim. You have to suffer a prejudice and when that happens to you, you can come to court.”

Courtenay said that the proper place for Orozco to rectify his issue is in the National Assembly, not the court, and there he can seek legislation to change the law on the matter.

In his argument, Courtenay said that the claimant had formerly made requests to the National Assembly for an amendment of Section 53, but the Government has said that they are not prepared to do so.

He added that the claimants are upset about that and have come to the Chief Justice as an alternative. He said that that is like asking the Chief Justice “to take out his judicial whip and lash and discipline the legislature,” because they are not doing what is being requested of them.

“That has no place in our democracy,” he said. “When it comes to lawmaking and when it comes to defining what is a criminal offense in Belize, that is determined by the National Assembly and not by the Supreme Court.”

For his part, Christopher Hamel-Smith, attorney for Orozco, said that they have made it clear from day one that section 53 is inconsistent with the Constitution in regards to what consenting adults do in private.

“So we are simply saying that the Constitution requires that any law that is inconsistent with the Constitution be void to the extent of that inconsistency,” he said. “So it only reaches to the question of consenting adults having sex in private, no more, no less.”

Hamel-Smith said that the Supreme Court can amend the law without having it affect the rest of the Constitution.

Who is right will be known when the judgment is passed, sometime before August this year.