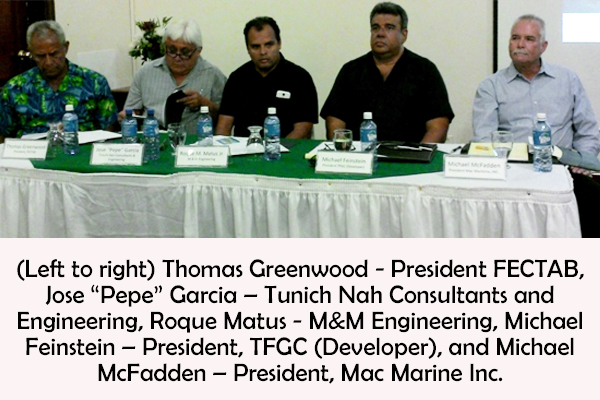 Michael Feinstein, president of the Feinstein Group of Companies, held a press conference/public launch this morning of a proposed US$100 million tourism project for the development of a cruise port at Stake Bank and a shopping zone on North Drowned Caye, about two miles off the coast of Belize City.

While Feinstein described the project as 100% Belizean, he also indicated at the press conference, held at the Belize Best Western Biltmore Hotel, that Royal Caribbean – a leading international cruise line with which his enterprise had partnered initially to bring on-stream the Fort Street Tourism Village in Belize City – intends to invest in the new venture. Royal Caribbean runs the only existing cruise port in Belize. Another port, however, to be built by Norwegian Cruise Lines, has recently been proposed for Southern Belize. The Stake Bank project is also being considered for government approval.

Mr. Feinstein’s project idea is evidently about a decade old, and when we asked him to explain what major challenges have held up its realization, he had two words for us: “government interference.” He declined to elaborate when we pressed him.

Minister of Labour, Local Government, Rural Development and National Emergency Management and Immigration and Nationality, Godwin Hulse, who heads the Cabinet subcommittee on investments, had indicated to our newspaper earlier this week that the proposal has not yet gotten the sanction of Cabinet, and the Cabinet subcommittee members are reviewing all documentation in the hope that they can get back to Cabinet, perhaps next week.

Hulse said he was not aware of a meeting of the National Environmental Appraisal Committee (NEAC), which was slated to meet on Tuesday; however, he added that whatever they do does not circumvent Cabinet procedure, which entails a 5-point analysis, looking at the social, economic and environmental dimensions of investment projects.

Feinstein is still trying to get Government sold on the project:

“One of the main concepts we are trying to sell to the Government, at this point, is this shopping – this beautiful shopping, of which everyone has their own opinion. However, the truth is, with $350 million being spent in Mexico, in Chetumal actually, annually, there doesn’t seem to be a plan to keep that money… [here.] I think that this project is designed to just do that,” he said. He said that the project should be able to keep about $200 mil of that $350 mil here in Belize.

“Now the concern that I’ve heard is – what happens to the local merchants?” Feinstein shared, but added that if he doesn’t do the project, the money will leave the country in any event.

According to Feinstein, the Stake Bank/North Drowned Caye project would mean a boost of $700 million a year for the Belizean economy.

Michael McFadden, president, Mac Marine Inc., who has been collaborating with the Feinstein Group on the project, delivered a slide presentation in which he indicated that the cruise tourism market is growing, especially with a bigger clientele coming from Europe in addition to North America – the #1 market for the sector.

Tom Greenwood, president of the Federation of Cruise Tourism Associations of Belize (FECTAB), said: “It behooves us to support this project, because the industry is evolving. Anytime—and you’re quite welcome—anytime you want to come out to Fort Street Tourism Village, and you see the living hell that’s taking place there, then you’ll understand what evolution is all about. The cruise lines are not happy with a lot of the stuff that happens there. When you get out there and you see some enterprising Belizean lying down on the ground, sticking his head under a gate, to try to sell a little item made from bamboo – I don’t know about you, I may consider myself a tough you-know-what – my eyes get wet. That’s not the way it’s to be…”

FECTAB had approached Feinstein for assurances that Federation members would get a space on Drowned Caye, and according to Greenwood the answer was “a resounding yes” – although it was clear to him that the space would not be available for free.

Greenwood said that Federation members see this move as critical for their survival in the sector – because of emerging international trends in cruise tourism:

“Within evolution, there is pain. There is not only pain – there is loss. Some things are left behind while other things move forward. We believe that the Feinstein project is the way to go – and I’m going to be very selfish about this – for the Federation members. The Federation members see this as the survival mode, because when 2015 comes around, if we are not able to access our passengers and vice versa, then a lot of people who have mortgaged their properties, their homes, who have put their all in this industry will die within one day!” Greenwood commented.

The FECTAB president, who has come out boldly against the proposal by Norwegian Cruise Line to build a US$50 million port in Southern Belize on Harvest Caye, cited the negative impacts cruise tourism has had on the overnight tourism subsector; but, again, he said that the way to cope with the reality is by changing with the times.

Jose “Pepe” Garcia of Tunich Nah Consultants and Engineering, who was responsible for preparing the Environmental Impact Assessment (EIA) for the Stake Bank project, signalled his total support for the project, claiming that the project is positive on the social, environmental and economic fronts. He said that Belize will make money and the minimal environmental impacts which he anticipates will be carefully studied and mitigated against.

Roque Matus of M&M Engineering, who has been contracted to build the 11-foot high causeway which will connect the island and the mainland, said: “This is a project that I have been working on for 10 years with Mister Mike, and I have also visited a lot of causeways around the world over the 10 years that I have been dealing with this project, so as an engineer, practising engineering for almost 20 years in Belize, I like… when the causeway is built, I can attest that it will be 100% Belizean. We will have probably 1,000 people involved in the construction of it, and also the confidence that he (Feinstein) has given us – our company – in doing a lot of projects outside-the-box for the last 10 years that have enhanced my company in other works – that we can do this causeway efficiently, cost-effectively, and I know a lot of people’s concern is about the fish and the marine life, but I have visited Cozumel, Cancun and these places, and fishes and manatee and everybody swim around us and we are swimming and nothing is being affected, so I can’t see how some piles in the water will affect these marine life.”

Feinstein told the press that he expects that Stake Bank will be on Cabinet’s agenda imminently. He said that they are very close to concluding the agreement, based on what he has heard from Prime Minister Dean Barrow.

According to Feinstein, they are asking for export processing zone (EPZ) status – a duty-free zone – for North Drowned Caye to be able to compete with Chetumal.

On the question of the head tax charged to cruise tourists – a US$7 levy of which US$4 goes back to the investors – Feinstein said that the proposal for his project is US$5 a head, with a split that would give Government a better piece of that pie.

He also said that the project would generate 3,700 permanent jobs.