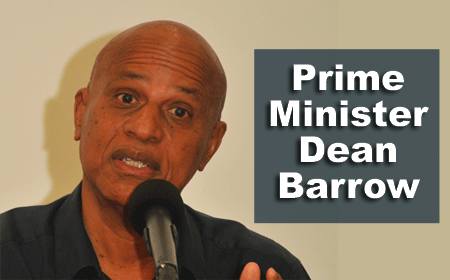 BELIZE CITY, Thurs. Nov. 2, 2017–The Barrow administration, and the country, suffered another devastating legal loss to Lord Ashcroft-related entities when the Caribbean Court of Justice, Belize’s highest court, on Wednesday, November 1, delivered a stinging judgement regarding the terms of the final payout of compensation for the government’s acquisition of Belize Telemedia Limited.

In the case of the Attorney General of Belize versus Dean Boyce, Dunkeld International Investment Ltd. and The Trustees of the BTL Employees Trust, the Caribbean Court of Justice (CCJ) issued a ruling which determined the final amount of money that the Government of Belize had to pay to Dunkeld International Investment Ltd. and the Belize Telemedia Employees Trust.

The Court ordered payment to be made by November 10, 2017, or within 10 days from the date of the judgement. According to the CCJ’s ruling, this was deemed sufficient time for the Government of Belize
to make payment.

The matter arose from a Settlement Agreement made between the parties – Prime Minister Barrow on behalf of the Government of Belize on one hand and Lord Ashcroft on the other — in mid-2015. Regarding the details of that agreement, Prime Minister Barrow had advised the country that he had personally indicated consent to all the details of the settlement with Lord Ashcroft in a private Miami meeting. The Settlement Agreement provided the terms for calculating payment of compensation arising from the nationalization of Belize Telemedia Ltd (BTL) and associated companies.

The Agreement required payment in installments, with the last installment to be determined, by consent of all parties, through an order of the CCJ. As part of the Agreement, the last installment of funds due to be paid by the Government in Belize dollars was to be held on trust to fund projects for the benefit of the Belizean people. The Prime Minister, after his return from the Miami meeting in 2015, had billed this facet of the agreement as a win for Belize and classified this payment structure as redress for the purportedly invalid “Accommodation Agreement” signed by the Musa Administration in favor of Lord Ashcroft.

The final payments to be made under the Settlement to Dunkeld and the Trust due on June 28, 2017, were based upon a total determination of the “Dunkeld Liabilities” and the “Trust Liabilities” — that is, costs incurred in connection with the compulsory acquisition of BTL.

The CCJ, in its consent order, had granted liberty to apply to the Court if issues arose as to enforcement of the terms of the settlement. A dispute arose as to the calculation of the amounts of US dollars and Belize dollars that should have been remitted to the claimants, so they returned to the CCJ to settle the issue.

To determine the final payment, Dunkeld and the Trust unilaterally appointed a reputable independent auditor to determine their respective actual liabilities as of 28 June, 2017, without seeing if all parties could agree on one auditor or have one appointed by the court if there was no agreement. The Government of Belize made it clear in March 2017 that it would not accept liabilities other than as
agreed by itself.

The claimants, however, waited until after the due date before applying to the CCJ. In its judgement, the CCJ held that no interest should be payable from June 28, 2017 until November 10, 2017, but the amounts due should be determined on the basis of the independent auditor’s certification of Dunkeld and Trust Liabilities as of June 28, 2017.

The CCJ is holding the Government of Belize to tough terms if the payments are not remitted by November 10, 2017. If full payment is not made by then, interest of 8.34% compounded quarterly under the arbitration tribunal’s award will be applied to the remaining amount.

Moreover, interest on unpaid interest will also be payable at the rate of 6% compounded monthly under the terms of the Settlement.

No order was made as to costs.

In response to the press on Wednesday, Prime Minister Barrow indicated that the Government had the means to pay the sums due and would be remitting payment forthwith. The Prime Minister also advised that while this would be a strain on the country’s foreign reserves, foreign exchange inflows from the upcoming tourist high season should quickly offset the temporary dip in reserves.

The CCJ, in its ruling, identified fundamental flaws in the Settlement Agreement document as the main
reason for the turning of the case in favour of the Ashcroft-related entities.

When asked if he would accept the blame for the shortcomings in the agreement document which have led to this adverse outcome, the Prime Minister, one of the most experienced attorneys in the country, responded that he would have to, but clarified that he did not draft the agreement.

Attorneys for the claimants have indicated that the Settlement Agreement document was provided by the Government of Belize. It is still unknown which attorney drafted the agreement on behalf of the Government.