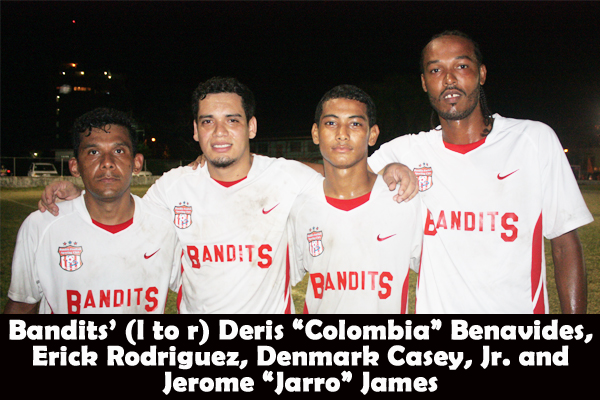 The picture changes quickly in this fast moving abbreviated Premier League of Belize (PLB) 2013-14 Closing Season, and with their defeat of Verdes on Saturday night at the Isidoro Beaton Stadium, home standing Police United have joined Verdes FC at the top of the standings. Police have the edge in goal difference.

Week 4 games of the PLB Closing Season were played over the past weekend, while Week 5 games take place on Wednesday.

The PLB secretariat reported today that a second half goal from Harrison Tasher (63’) stood up to give Police United FC the 1-0 win over visiting Verdes FC at the Isidoro Beaton Stadium on Saturday night, March 22.

In the first of two Sunday games, at the Norman Broaster Stadium it was a 0-0 draw between San Ignacio United FC and the visiting Paradise/Freedom Fighters from Punta Gorda, Toledo.

And in the other Sunday match here at the MCC, after an hour long delay due to a clash of uniform colors, the visiting Belmopan Bandits came away with the 2-0 win over FC Belize with goals from Deris “Columbia” Benavides (35’ PK) and Jerome “Jarro” James (89’).