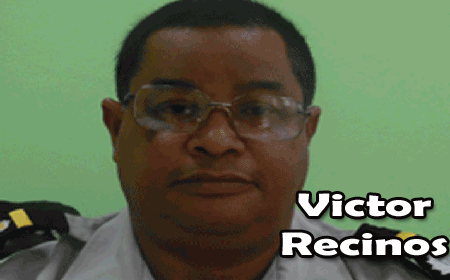 BELIZE CITY, Fri. Dec. 4, 2015–Victor Recinos, 54, is the new Controller of the Customs & Excise department; he officially takes over on Monday from Emil Grinage, his predecessor, who has reached the retirement age of 55. Recinos will be in charge of 217 employees and he takes the helm at a crucial time in Belize, when it seems that contraband activity is on the increase.

There have been recent incidents such as the latest one in which a truck from Corozal that contained 500 boxes of cigars was seized by Mexican police: How did this manage to pass our borders undetected?

Indeed, Recinos has his job cut out for him; however, he brings to the position 36 years of experience and he has held every position there is in the Custom’s Department, and worked at every station.

Recinos told Amandala, “We are the frontline or premier agency of anything being imported or exported.”

Recinos said that his staff is small and the area of borderline that needs to be patrolled is large; therefore, they need to work “smart”. He added that his plan is to petition the government to give the department the appropriate equipment that can assist them in being more effective.

Recinos said that one of the Custom Department’s functions is to carry out regular patrols of the border and set up checkpoints in order to ensure that individuals are not trying to avoid paying duty, and that they are using an acceptable port of entry and not illegal ones, which would be in direct violation of immigrations and customs laws. For example, he said, San Francisco Botes, a Mexican village along the border which Belizeans can access by a 10-minute boat ride from Santa Cruz Village in Orange Walk District, is an illegal entry point.

Recinos said, “Once you have not passed through the proper port or you try to bring something without declaring it and paying, that is contraband.” “Our job is to stop contraband because the contraband goods constitute unfair competition in the marketplace,” Recinos added.

Recinos went on to say that contraband is embedded in our culture and in order to change that, we have to educate our people and make use of the full force of the law where necessary. He reminds our readers that a person caught with contraband has to pay fines equivalent to three times the cost of the item; however, for goods that exceed $75,000 in value, the perpetrator will stand trial in the Supreme Court.