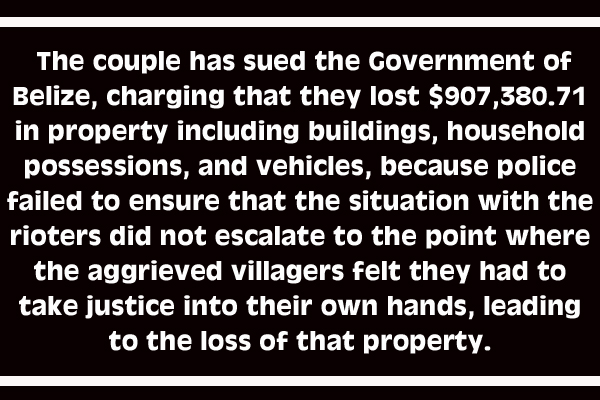 In September of 2010, villagers of San Marcos, Toledo District, out searching for missing children Benjamin and Onelia Rash, were convinced that American couple Vincent and Cherie Rose, who operated the American Crocodile Education Sanctuary, ACES, just outside of Punta Gorda Town, had something to do with their disappearance.

As a result, the home and business of the Roses, now based in Ladyville, was burnt to the ground, forcing them to relocate, but the children have never been found.

The couple has sued the Government of Belize, charging that they lost $907,380.71 in property including buildings, household possessions, and vehicles, because police failed to ensure that the situation with the rioters did not escalate to the point where the aggrieved villagers felt they had to take justice into their own hands, leading to the loss of that property.

Attorney representing the Roses, Agnes Segura-Gillett, said that the suit, heard by Supreme Court Justice Oswell Legall, was filed to determine both the issue of liability and compensation. On the matter of liability, the applicants had to prove that a riotous assembly as defined in the Riots Compensation Act, Cap. 338 of the Laws of Belize, occurred – that is, persons were assembled with the purpose of committing a riot as defined in the Criminal Code, and if such liability was proven, then the matter of compensation would be determined.

Last Friday, August 17, Justice Legall issued a ruling on this part of the case, finding that such an assembly did occur and as a result of the Roses being unable to get their matter of compensation heard by the relevant Minister, the Government was liable for such claim.

Now, the two sides have been asked to provide written submissions answering whether it will be the Court or the Minister who makes the determination on compensation. The Court will issue its decision on this in a month’s time.

The Roses attached a schedule to their claim setting out the cost of each item they lost due to the fire started by the rioters.

A report was made to the Office of the Ombudsman concerning the police’s conduct in the matter but nothing has come of it so far. Indeed, no one has ever been criminally charged in connection with the incident, save an alleged “fortuneteller” who was accused of sending angry villagers to the ACES compound because she thought the children were there.

Manza out, Musa out, no DHS?