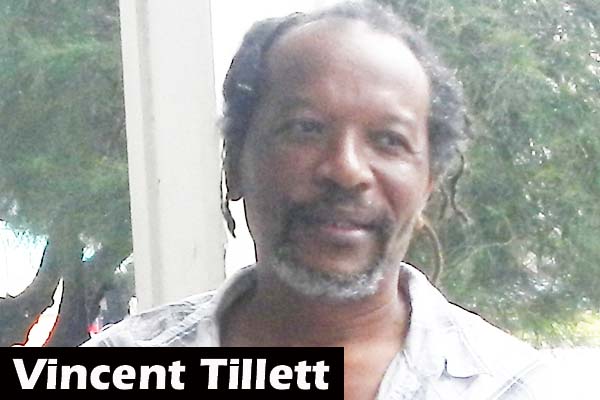 Tillett was convicted of the 2011 manslaughter of Darwin Phillips, who was stabbed to death in front of his young child, and Tillett’s children as well

Vincent Tillett, 49, also known as “Stino,” was sentenced to 15 years in prison this morning when he appeared before Justice Adolph Lucas. Tillett was convicted of the lesser crime of manslaughter on November 15, 2013, in a trial without jury for the February 13, 2011 stabbing of Darwin Phillips, 22.

Phillips was at the home of Denise Stuart celebrating the birthdays of three persons in that family. Between 7:00 and 7:30 that night, Tillett arrived at the house to drop off two of the four children he has with Stuart.

Tillett went into the kitchen and when he emerged, he approached Phillips and stabbed him once in his chest, in front of his young children, and Phillips’ child, who were there watching a movie.

On February 14, 2011, Tillett contacted police and told them they could apprehend him by the Haulover Bridge, which they did. During an interview with the police, Tillett confessed to stabbing Phillips because Phillips threatened to kill him.

Tillett and his lawyer, Arthur Saldivar, both vehemently denied the confession, but the judge didn’t believe them.

The sentencing was supposed to have happened yesterday, but after mitigation hearings from three character witnesses were heard, Justice Lucas adjourned the matter for this morning.

Those witnesses were Alvin Hyde, Jr., Tillett’s friend; Naera Polanco, his stepdaughter; and Rev. Melvin Davis, pastor for Church of Christ churches. All of them spoke of Tillett’s calm demeanor and of how he used to provide for his family.

Arthur Saldivar then spoke on his client’s behalf, telling the court that it was only the extremely extenuating situation in which his client was placed that made him react in such a way. He then asked the court to take into consideration that being 49 and without a criminal record was outstanding, since the norm is to have one before reaching half that age.

When Justice Lucas addressed Tillett this morning, he told him that he had to consider the aggravating factors which were that Phillips was stabbed to death without any provocation; Phillips was stabbed in front of his and Tillett’s children; that Tillett showed no remorse; and that he didn’t assist Phillips after he was stabbed by taking him to the hospital.

But Justice Lucas also considered the mitigating factors which were that Tillett turned himself into the police on his own; he admitted to stabbing Phillips; and that his witnesses spoke of his good character.

Justice Lucas then sentenced Tillett to 15 years in prison, but subtracted the three years he spent on remand for this crime. His remaining sentence is thus 12 years, effective today.