All visitors win in Week 5 of National Over40 Tournament

BELMOPAN, Tue. July 4, 2017–The Belize National Over-40 Football Tournament 2017 continued over the weekend with Week 5 games featuring all 8 teams in the competition, and the visitors were victorious in all 4 games played.

On Saturday afternoon at the MCC Grounds, visiting Belmopan Veterans came away with a 3-2 victory over BDF Veterans, with Gary Wiltshire (38’, 78’ & 82’) netting all 3 goals for the visitors; while BDF got a goal each from Joel Wade (4’) and Godfrey “Brads” Dominguez (75’). And later on Saturday night at San Pedro Stadium, the visitors were also victorious, as Kulture Yabra Veterans won, 3-1, over San Pedro Veterans. San Pedro got the first half lead through Edgar Lima (5’); but Kulture came back strong in second half, as goal scoring leader Kevin Rowland tied it up at the 52nd minute, and Maurice “Magic” Francis struck twice (58’ & 71’) to secure the Kulture victory. 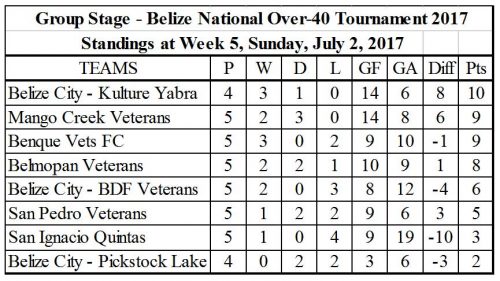 The trend continued on Sunday afternoon at the MCC, where the visiting Benque Veterans dropped Pickstock Lake-I, 1-nil, on a goal by Julio Ayala (36’). Meanwhile, out west at the Norman Broaster Stadium, home standing San Ignacio Veterans were out-gunned, 5-3, by the visiting Mango Creek Veterans. Shaking the net for Mango Creek were Bent Burgess (26’), Robert Muschamp (50’), Wayne Castellanos (64’) and Benigno Espinosa (61’ & 83’); while San Ignacio got a goal apiece from Nester Valle (71’), Angel Martinez (73’) and Ramiro Carrillo (90’).

Only Kulture Yabra Veterans and Mango Creek Veterans remain undefeated in the competition, and they will clash this weekend. (See standings below and upcoming schedule.) After a single round-robin, the top 4 teams go on to the home-and-away semifinals.