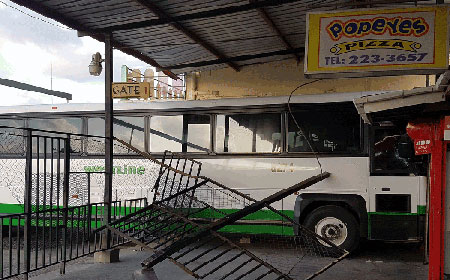 BELIZE CITY, Thurs. Aug. 18, 2016–Commuters fled for their lives as a Westline bus crashed into the waiting area of the Belize City bus terminal without warning.

Sometime close to 5 p.m., the bus pulled up into the terminal in preparation for its regular 5:15 express run to Cayo. However, that run had to be cancelled following the incident.

When Amandala spoke to Muhammad Kwasr, 23, who owns Reliant Store, which is located inside the terminal, he told us that if he had not dived out of his shop, he would have been directly smashed by the bus.

According to Kwasr, who is the only person authorized to sell tickets for the Mexican-owned Ado bus, there were several tourists inside the terminal at the time of the incident. The store also sells sodas and other food items.

Kwasr, who saw the incident unfold before his eyes, told Amandala that he saw the bus pull in to the terminal and immediately, the driver jumped out, apparently forgetting to put the vehicle into park.

Kwasr, who escaped the incident by an inch, told Amandala that his loss is in the vicinity of $10,000.

Police are yet to release any details about the driver and are yet to announce if there will be any charges against him.

Amandala attempted to contact Westline for comment, but they have not answered our calls. Fortunately there were no injuries or fatalities reported.