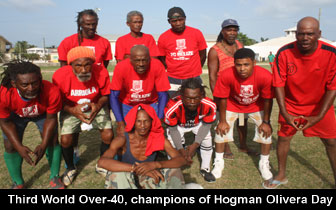 BELIZE CITY, Mon. May 11, 2015–Young and old gathered around the Third World football field, next to St. Martin’s on Vernon Street yesterday, to participate in a Mother’s Day celebration of football that was also dedicated to honor and assist one of Belize’s great footballers of the past, Wayne “Hogman” Olivera, who was on hand to distribute trophies and awards to the winners of the day’s events.

On the initiative of neighborhood activist Anthony “Mango” White, Wayne “Hogman” Olivera Day was originally scheduled for May 1, but had to be postponed due to bad weather; and they decided to join it to the Mother’s Day celebration yesterday.

While the atmosphere was one of “peace and love” and sporting excitement among the youths and veterans waiting their turn to play, regrets, were in order for those youths older than 13 years – the one day tournament could not cater for the U-15 and U-17 players, who could only look on with longing eyes.

A number of individuals have reportedly given their personal contributions to Hogman to aide in his continuing daily therapy, and he expressed his great appreciation for the assistance.

Four youth teams (13 & Under ), participated in a double elimination – Burrell Boom, Miller’s Back-a-town, Third World, and Face of Belize. Boom took third place; and Third World and Face of Belize went to penalties in the finals, after being deadlocked 1-1 in regulation. Third World prevailed 4-2 in penalties, and immediately afterwards, medals, trophies and awards were handed out by Hogman, assisted by Mango. Hogman personally selected the day’s MVP. First place received a team trophy along with individual Gold medals; 2nd place got a team trophy with individual Silver medals; and 3rd place players each received a digital watch. (Jex Trophies donated the team trophies; Kent Santos and family donated the 1st and 2nd place medals; Amandala donated the MVP and Most Goals trophies; and a brother known as “Wap” donated the watches for 3rd place.)

Thirteen year old St. Luke Methodist student Justin Menzies, who scored 5 goals during the course of the day for Third World, received both the Most Goals and the MVP trophies from Hogman, who advised him to work hard on his weaker foot, his right, so that he can become a two footed striker (like Hogman was) in years to come.

For the veterans Over-40 category, 3 teams showed up, and Plaza knocked off defending champs Kulture, 1-nil, on a goal by “Brads” (Godfrey Jenkins), as Third World, the host team, got a bye into the finals. And in the finals, it was Third World, 2-nil, over Plaza, with a goal apiece from “Mango” (Anthony White) and “Dubu” (Bernard Thomas).

It was a day of football fun, memories, and hope for the future, as veterans discussed afterwards the urgency of getting a tournament going for the U-15 and U-17, who are the most vulnerable members of our population right now. Sunday’s MVP, Justin Menzies, and other 13 year olds who are still able to participate in the ongoing Smart 13 & Under tournament, will soon cross that age threshold, whereupon “Restore Belize” may focus their efforts on “Conflict Resolution.” The consensus by veterans at Third World field on Sunday was that money is better spent in sponsoring these needed tournaments to help our youths to channel their energy and learn to socialize in the disciplined environment of sports.