Ya da fu we Belize! 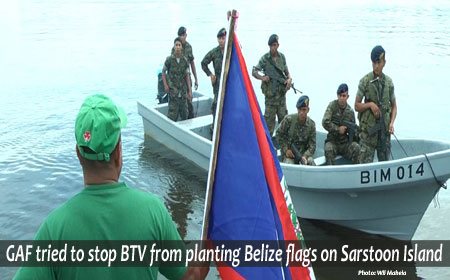 SARSTOON, Toledo, Fri. June 7, 2015–“Ya da fu we Belize! From Benque to Belize City, from Punta Gorda to Corozal… from Rio Hondo to the Sarstoon… We pledge to defend our country and exploitation we’re going to fight… Independence. (Now!) No land cession…”

These lyrics—originally penned in Spanish and performed by Luis Enrique Mejia Godoy with his band the Mancotal of Nicaragua when they attended Belize’s inaugural Independence celebrations as guests to show solidarity with our nation—have not faded from the minds of Belizeans who have heard them replayed in the English rendition by Bamika Bandula and Belizean artists who continue to keep those lyrics alive.

But they are more than just words; they enshrine an important declaration affirmed by the international community. When Belize celebrated its Independence on September 21, 1981, it did so with the comfort of a United Nations Resolution which called on all states to respect the right of Belizeans to be an independent nation, with all its territory intact. The “inviolability and territorial integrity of Belize” was declared in a preceding UN resolution of 1975, which means that our territory should never be broken, infringed, or dishonored.

Belize’s territory, as depicted on international maps, as well as on Google Earth imagery, includes the Sarstoon Island, which spans over 150 acres—a substantial mass of insular territory to which Guatemala has recently staked a claim.

Information published by the Belize Referendum Commission says, “Belize is not sure what claim Guatemala would bring to the ICJ.”

It explains that, “Guatemala’s claim to Belizean territory has changed many times over the years.  In 1994, the Government of Guatemala reiterated its claim to the entire territory of Belize.  The most recent claim, put forward in 1999, is to the area between the Sibun and Sarstoon Rivers, and all the cayes except St. George’s Caye.”

The ICJ Special Agreement, which was amended in Guatemala City last Monday, May 25, requires Guatemala to bring “any and all” legal claims so that there would be a final understanding of its claim, and an end to any further claim, the Commission documents.

The Commission also notes that the ICJ would rule on the validity of the 1859 Treaty, which documents the boundaries of Belize as they were recognized at the time and as they continue to be recognized in Belize’s Constitution.

Wil Maheia, founder of the Belize Territorial Volunteers (BTV), recalled that a few years ago, Guatemalan Armed Forces (GAF) officers had challenged the BTV’s presence on Sarstoon Island, just as it recently challenged the presence of the Belize Coast Guard. The BTV group had gone to the area to erect Belize flags on the island, and the Guatemalans were adamant that they could not leave any of the flags there.

This Tuesday, there were multiple, apparently mischievous reports circulated in the public domain, and especially on social media, claiming that the Guatemalans were erecting their flags on the Belize side of the border, including on Sarstoon Island; however, those reports proved to be false.

Maheia had hired a boat so that the BTV could investigate the report about Sarstoon Island, but he was told that they could not go to the island proper because boat operators are now fearful of going into the area, because of the Guatemalan military.

Last weekend, Maheia found evidence of illegal fishing with nets in the area – reported as a prevalent problem in the area.

We spoke with a law enforcement officer who frequents Belize’s southern coastal waters, and we were told that while they do patrol the Sarstoon area, there is that “gray area,” near the Belize-Guatemala border, that they do not generally police.

The officer referred to a “soft policy” of not venturing to certain parts of the Sarstoon, but this policy has been having a negative impact on natural resource management and conservation – in the same way that limited enforcement in western Belize has resulted in increased pillaging of natural resources in places like the Chiquibul.

Information reaching our newspaper indicates that at the court level, there are far less illegal fishing cases being heard in that jurisdiction this year when compared to the same period last year.

Our source told us that last year was the last time an illegal fishing arrest was made in the Sarstoon area. The persons, who were reportedly fishing almost 2 miles inside Belize without a license, were charged in relation to illegal gill net fishing, and their dory and net were confiscated.

We were told that Belizean law enforcement officers used to be more aggressive in the Sarstoon area, and whenever they saw persons, usually illegal fishers from neighboring Honduras and Guatemala, engaged in illegal activities, they chased them and took away their boats. However, this led to tensions, and in at least one instance, a threat was directed back at certain enforcement officers, warning them that they would be burnt up if they persisted.

With expanded cell phone coverage in the area, there are Guatemalans and Hondurans now on the lookout for security officers, and these individuals would call to warn persons conducting illegal operations in the Sarstoon area of such security presence.

The law enforcement officer we spoke with said that the illegal fishers have found ways of evading security officers, whom they can also spot from a distance and whom they can identify by the markings on their boats and by their uniforms.

“When Wil goes there, he will catch them because he is not law enforcement,” the officer said. “If it’s BDF or Fisheries, they know who [they] are and will pull up their nets [before the officers get there].”

Sometimes, the illegal fishers hide in the mangroves on Sarstoon Island, or speed off in their boats.