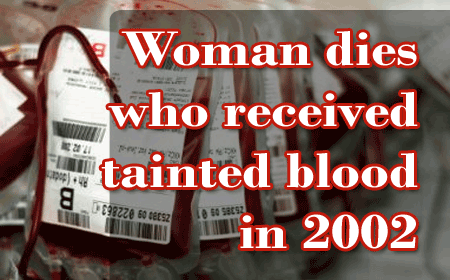 BELIZE CITY, Thurs. Mar. 31, 2016–Giving blood can save lives, but it can also cost lives if inadequate screening is not in place to ensure that deadly pathogens aren’t passed from the donor to the recipient in need of this vital life force. This has been underscored in the case of a young woman who recently passed away, ending 13 years of medical suffering after she contracted the Human Immunodeficiency Virus (HIV) via blood transfusion when she was just a little girl.

Sadly, the young woman’s family, which apparently did not have adequate legal representation, settled for paltry compensation, and when they realized that it was not enough to sustain their sickly daughter, all efforts to get further compensation proved futile. The young woman’s case was still unresolved when she died some weeks ago.

The case of the 21-year-old—highlighted in the 2015 Ombudsman’s report released on Wednesday—is eerily similar to the cases reported in the media around 2001/2002, when multiple patients at the Karl Heusner Memorial Hospital and the Southern Regional Hospital were fatally administered HIV-tainted blood.

Former health minister, Joe Coye, whose ministry had come public to explain the fatal human errors which had resulted in HIV being transmitted to young children, a mother and an elderly man, told us today, when we contacted him that he does not recall the case, which was just made public by the Ombudsman’s 2015 report.

Ombudsman Lionel Arzu’s report said that there was a complaint filed in 2013, before he was appointed, on behalf of a female who, in 2002, was fatally administered blood contaminated with HIV and Syphilis. The blood was obtained from the local blood bank, Arzu said.

“Regarding the complaint of the child victim of medical and professional negligence, the investigation could not move forward because the child’s parents in 2002 signed a release of all claims and causes of actions against the authorities in return for compensation of BZ$75,000.” Arzu explained.

“Although as an adult, the female wished to revisit the matter for adequate compensation and justice, the authorities were generally uncooperative. Sadly, she died in December 2015,” he lamented.

Regrettably, due to her medical problems, the girl could not complete primary school, although there was an undertaking from the Government to pay for both her medical and school expenses, Arzu explained.

When he took over, at the Ombudsman’s office, Arzu tried to follow up on the case, to see if he could ultimately get a better arrangement for the young woman, particularly to take care of her medical needs.

Arzu said that when the girl visited his office with her parents, she appeared physically ill but with a strong will to survive.

The problem, though, was that the family had settled with the Government of Belize, through then Solicitor General Elson Kaseke, who had since passed away; and it turned out that there was very little that could be done, he indicated. Arzu was in touch with former Government counsel, Gian Ghandi, but no new arrangement was reached. Ghandi has also since passed away.

The patient’s father told our newspaper that she was 21 years old when she died last December. She was admitted to the Karl Heusner Memorial Hospital (KHMH) for treatment and her parents alleged that the girl had an adverse reaction to a muscle relaxant which, they contended, had hastened her death.

Chief Executive Officer in the Ministry of Health, Dr. Ramon Figueroa, told Amandala that the KHMH had advised him of the young woman’s death. He said that the KHMH had carried out an internal investigation, but found nothing to suggest that the death was caused by any wrongdoing.

Arzu also told us that as far as he is aware, there was no indication of any wrongdoing by the hospital with respect to the young woman’s death.

“The Hospital was considerate enough to conduct its own internal investigations and answer the parents’ questions. In November 2015, Dr. Peitra Arana, Coordinator of the U.S.A.I.D. PASCA National HIV Response Project met with the Ombudsman regarding complaints,” Arzu’s report said.

We asked the Ombudsman whether the case could still be pursued given the woman’s death, but he told us that more than likely, the case would be closed.

“Families have to be very careful when situations like these arise. It is only poor people who are affected like this. If they were well off, they would have gotten an attorney from day 1,” Arzu said, when we asked him what lessons could be learned from this incident.

He said that while $75,000 might sound like a lot of money, when you stretch that over a lifetime, it’s not. He said that the family may have used a portion of the funds to build a home for the girl, and used the remainder for her living expenses.