Following the discovery of the co-pilot of the crash-landed Cessna, police came upon 1,277.23 pounds of cocaine in the Hidden Valley area of Mountain Pine Ridge. 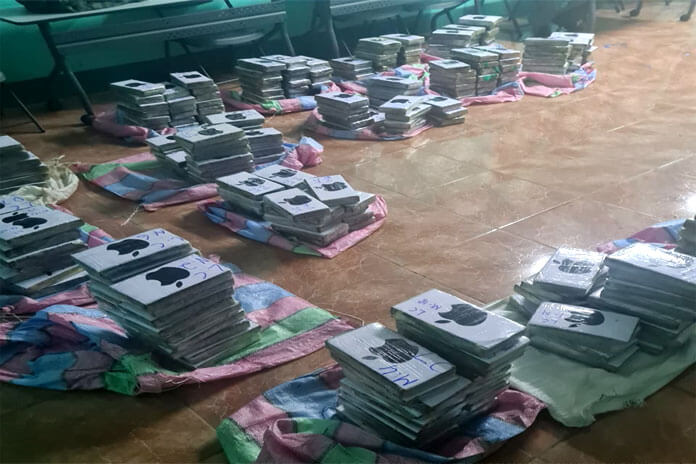 BELIZE CITY, Wed. Dec. 1, 2021 — After combing through the forests in Mountain Pine Ridge in search of the cargo of the Cessna Centurion aircraft that crash-landed in the area on Sunday morning, police on Tuesday discovered a payload of 25 ½ bales of cocaine (514 bricks) left behind by the narcos. According to Commissioner of Police, Chester Williams. more than 60 officers under the command of ACP Alford Grinage were deployed to the general area and carried out an intensive search which led first to the discovery of the badly wounded co-pilot, since identified as Jesus Alberto Quintero Martinez, a 27-year-old Mexican national, and then the cocaine cargo, still concealed in bales.

During a press conference at which he sat next to the Commissioner of Police Chester Williams, ACP Grinage told local reporters, “We had a plan. We knew what we wanted to achieve, and we stayed focused. We couldn’t leave the area, because we believed that they would have wanted to remove the cargo from that area, so we had to stay forth and continue our hunt.”

The discovery of the cocaine means that additional charges — for conspiring to import cocaine into the country — will be brought against the six Belizean men (Miguel Angel Zetina, Edwin Armando Gonzalez, Jaime Umberto Maz, Edilberto Medrano, Eric Young and Salus Penner) who were detained in connection with the landing of the plane.

The co-pilot of the plane, Jesus Alberto Quintero Martinez, whose leg and arm were fractured during the crash-landing, is currently admitted to a healthcare facility within the country after having been moved from the Western Regional Hospital by police, who cited a security risk to the hospital due to knowledge of Martinez’s whereabouts. Martinez, who is reportedly from Sinaloa, Mexico, and is believed by some to be connected to the Sinaloan cartel, is being treated at an undisclosed location until his recovery, after which charges will be brought against him.

“”The co-pilot was found not too far from the outlet, the main outlet near the highway, which means that they were already trying to take him out of the area, but because the checkpoint was there, they could not have, so they abandoned him before the checkpoint.  So what would have been done, they would have tried to walk him through the bushes past the checkpoint, but then the police were able to spot them and he was intercepted,” Commissioner Williams explained to reporters.

It is believed that the lead pilot of the aircraft, who was likely also injured, was quickly transported across the border in the get-away vehicle that police were unable to stop. (That vehicle is, according to Commissioner Williams, suspected to be a white Hilux belonging to Salus Penner, the Mennonite farmer who was detained in connection with the landing.) Commissioner Williams believes that most of the persons involved in the illegal operation have been nabbed, except for one person, the brother of Saulus Penner, the Mennonite farmer from Spanish Lookout now remanded at the Belize Central Prison for the plane landing.

“We have a pretty good idea who is the person who was responsible for manning the drugs and that happened to be the brother of the Mennonite that we have detained. He is being sought; we have not been able to find him,” said Commissioner Williams.

He further explained, “We do believe that there were some persons manning the drugs and perhaps when they heard the police in the area, they might have fled, leaving the drugs behind. What we also believe is that the drugs were not always there, it was somewhere else, but perhaps during the course of our operations in the jungle, they believed we were getting too close and they moved it to that location where it was found.”

Of note, a grey Hilux found near the location where the drugs were discovered is said to be the property of the wife of Penner. That vehicle, as well as Penner’s White Hilux and a black vehicle, is in police custody.

“”Our operations also unearthed a Toyota Hilux, a grey Toyota Hilux which belonged to the wife of one of the Mennonites who we believe is involved in the plane landing and is also detained and has been charged in respect to conspiring to land the plane. That vehicle was found in an area not too far from where the drugs were found. We also believe that that was the vehicle used to move the pilot from where the plane had crashed,” Commissioner Williams revealed.

The grey Hilux was in a deep gully, and police were making efforts yesterday to dislodge it from that location so that it could be used as evidence.

Additionally, there are questions about the whereabouts of two firearms owned by Salus Penner. Commissioner Williams told reporters that Penner is the holder of two gun licenses, but that police have not been able to locate those guns. “He is saying he don’t know where his guns are, so we believe his guns were being used by those manning the drugs as their protection,” said Williams.

As for the 1,277.23 pounds of cocaine, those drugs have been tested and are being held by police pending destruction. Some are surmising that it is not the entire cargo that was on the crash-landed plane that is in police custody, since 25 ½ bales of cocaine with the apple logo marking bricks were said to have been found, but the presence of a half bale is inconsistent with the fully intact and sealed format in which cocaine is usually transported. Questions have arisen about whether men involved in the narco operation could have moved some of the drugs, or whether some of the cocaine was removed by police officers.
“With over 60 officers on the ground in the area during the time of the bust, it is unlikely that any drugs would be taken by security forces in this instance …. The small quantity taken would not suffice the number of persons. There is no indication, however, if the drugs were taken prior to its discovery by players who may have been in the area unbeknownst to police,” Commissioner Williams stated at the press conference.