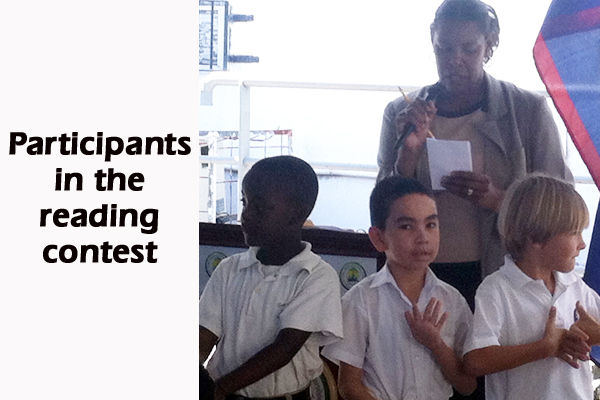 The Belize National Library Service and Information System (BNLSIS) this morning awarded over $700 in cash prizes to 10 primary school students at the end of a story reading contest which they plan to take nationwide next year.

Following eliminations in the northern and southern zones of Belize City, top contenders from St. Luke Methodist, Queen’s Square Anglican, Grace Primary, Belize Elementary, Holy Redeemer and Wesley Lower School read from a mix of foreign and local stories. (Ephesus SDA School was selected to participate but did not attend.)

The judges, Carmen Barrow, Norman Rodriguez and Joseph “Stamp” Romero, picked winners from three categories of entries after each student made their presentations at the Leo Bradley Library this morning.

In category 1 (the standard 1 students), Maddox Heusner of Belize Elementary School (BES) walked off with the top prize of $100. Second place in that category was captured by Devaughn Abraham of Grace Primary, who won $75, and third place by Ryan Rodriguez of Wesley Lower School, who won $50.

An official of the BNLSIS joked that the students made as much money as doctors do in that short space of time, for taking time to read in the contest.