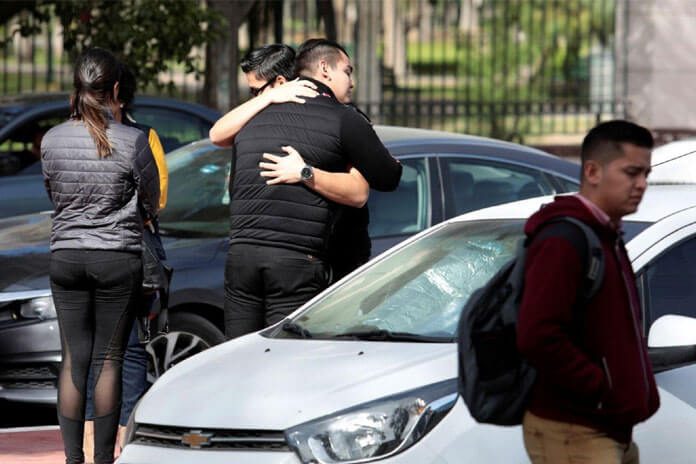 at 3:32 p.m. CST MEXICO CITY, Fri. Jan. 10, 2020 (The Washington Post)– An 11-year-old boy told his friends “Today’s the day,” then opened fire in a school in northern Mexico, killing a teacher and wounding six other people before fatally shooting himself, officials said Friday.

The school shooting was highly unusual in Mexico, where weapons are difficult to acquire legally.

“It appears the boy was influenced by a video game,” the governor of Coahuila state, Miguel Riquelme, said in a news conference.

Mexican officials and media said the boy had donned a white T-shirt with the logo “Natural Selection” — a video game — before opening fire. He carried two guns, officials said without providing details.

U.S. politicians have often speculated that violent video games play a factor in American school shootings, but researchers have found little evidence of such a link.

“In Mexico, we are not used to this phenomenon. We refer to them as ‘gringo-style shootings,’ “ said Javier Garza, a journalist in the industrial city of Torreon, where the shooting occurred.

Riquelme identified the 11-year-old as José Angel Ramos, a student at the private Cervantes School.

The boy lived with his grandparents, the governor said, adding that his mother died years ago.

“His friends said the boy didn’t show any sign of problems,” the governor told journalists.

But on Friday morning, Riquelme said, the boy told his companions “Today is the day.”

In addition to killing his 50-year-old teacher, the boy wounded another teacher and five students, two seriously, the governor said.

Mexican gun laws are strict. But homicides have soared to their highest levels in years, and few crimes are solved by the country’s weak, corruption-plagued justice system.

“Here you can’t go to Walmart and buy a pistol, like in the U.S.,” Garza said. “But probably you can get one on the black market with total impunity.”

Authorities said it was unclear how the youth acquired the weapons, which he apparently carried in his backpack.

The attack appeared to be the worst school shooting in Mexico since January 2017, when a high school student opened fire in the northern city of Monterrey, fatally wounding a teacher and wounding several students before killing himself.