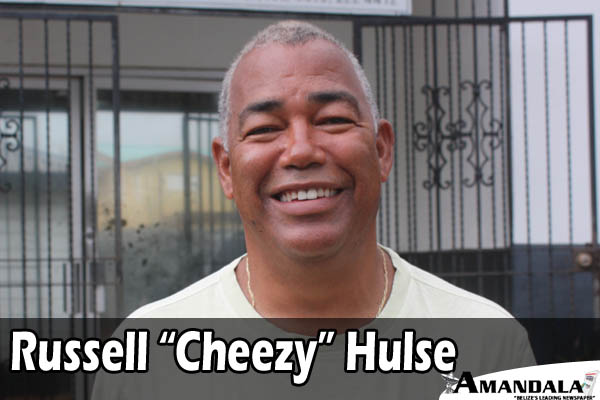 Amandala sports desk received a visit this morning from a former Belizean footballer who left the Jewel after only a couple years of senior ball, but proceeded to leave his mark in the top level of U.S. soccer. “Cheezy,” as he was known in Belize City when playing for the Spurs football club in the early 1970’s, was a tough young defender who played the stopper position, holding his own against some intimidating strikers of the day. Cheezy jokingly recalls a game when, after Independence striker Lee Mole (Raymond Alvarez) had hurt Spurs sweeper Philip Neal, their goalkeeper Canalete (Rupert Anderson) chased Lee Mole all across the MCC in retaliation for injuring his defender.

Russell “Cheezy” Hulse attended St. Paul’s Anglican primary school and Fletcher College (high school) in the 1960’s in Corozal Town, where he began playing with the La Victoria senior football team even while he still attended high school. After traveling at seventeen to play in the Belize City competition with La Victoria for a season, Cheezy then joined the Spurs football team of Belize City for the 1970-71 season, and they were on their way to winning the 1971-72 title, but the season was never completed due to a couple games which ended in brawls at the MCC. Encouraged by friends, Cheezy then decided to make a trip to the U.S. and spent some time in San Diego, then Los Angeles, drawn by fellow Belizean footballers who had teams in competition in the area. He recalls Otto Cattouse, Cador Thurton and Charles Hogan who had teams named Magnum (later Atlas), Neutrons and Warriors, respectively.

Playing a couple years in their local competitions, which were mostly recreational, Cheezy said he realized that his career was going nowhere in football; and, having seen the plight of some old retired footballers, he decided to enroll in a junior college to secure himself when his playing days were over. But he still harbored dreams of playing top level football.

One day in 1975, his eye was caught by a team he saw training in the area; they seemed to be of a higher caliber. Cheezy said he was looking for something more in his football career, and was attracted to the team by the way they trained; they looked like they were really serious. He found out that the team, Maccabi Los Angeles, was originally formed in 1971 by a group of former Israeli national team players (the 1970 World Cup was in Mexico) who were later joined by a few players of various nationalities. He introduced himself, a player from Belize, and they invited him to try out for the team; and the rest is history.

There is nothing in the way of information about Cheezy Hulse on the internet right now, but if you google “Maccabi Los Angeles,” you will find out quite a bit about this outstanding team in U.S. Soccer that features one Belizean football player, Russell Hulse, who was a standing member of their National Challenge Cup roster from 1977 until the club played its last season in 1982. Cheezy played mostly defensive stopper, and was a regular starter throughout this period alongside teammates from the U.S.A., Argentina, Mexico, England, Spain, Brazil, Trinidad & Tobago, Russia, the Netherlands and, of course, Israel. Through all those years, he was the sole Belizean player on the Maccabi.

According to Wikipedia, the “Maccabee Los Angeles” semi-professional soccer club “competed in the National Soccer League of Los Angeles and other national soccer competitions, including the National Challenge Cup (US Open Cup), most notably becoming only one of two teams (alongside Bethlehem Steel FC) to win the competition five times.

“The team was founded in 1971 and dissolved in 1982. They were Triple Crown winners twice in 1977 and 1978, winning the National Soccer League title, California State Cup and the National Challenge Cup. Maccabi played Bridgeport Vasco da Gama from Connecticut in the 1978 National Challenge Cup Final at Giants Stadium in East Rutherford, New Jersey in front of a crowd of 30,000 people. The game was part of a double header with the New York Cosmos and the Tampa Bay Rowdies of the North American Soccer League, which featured Cosmos’ players Pele, Franz Beckenbauer, Giorgio Chinalgia and Tampa’s Rodney Marsh. The team ceased operations after the 1982 season.”

Among the honors won by the Maccabi team were:

We noted the team roster for the National Challenge Cup in 1977, 1978, 1980, 1981 and 1982, with all international line-ups where players’ names had their country flags beside them according to FIFA eligibility rules, and one Russell Hulse’s name appears in each of them with the Belize flag beside his name. He was the only Belizean on the team; and here at home we were hardly aware of the level of competition he was involved in at the time.

Cheezy, who says he has taken up coaching since his retirement from playing, is on a two-week visit home and returns to the U.S. on Saturday, August 2. His wife, Therese, is the daughter of Belize City chemist Douglas Fairweather; and they have two daughters, Kelsey, 20, and Cori, 15, who is herself a promising track & field athlete.

Our belated congratulations to you, brother, for representing the Jewel with dignity during your days in top level competitive football in the U.S.

Hopefully, someday the FFB might reach out to Cheezy and other outstanding past players at home and abroad for their input and advice on our own youth and national team programs.