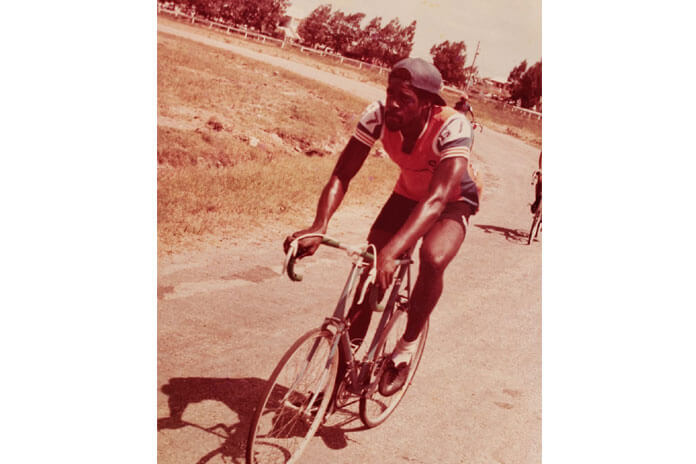 BELIZE CITY, Wed. May 27, 2020– Yesterday, Tuesday morning, Kremandala received the sad news of the passing of our long time neighbor and friend of Partridge Street Extension, renowned cyclist of the 1970s, Glen Gordon, also known to his many fans as Black Samson. Over six feet tall and of a very dark complexion, soft spoken and dignified, Glen earned the “Black Samson” nickname from cycling colleagues and fans for his consistently powerful performances both in weekend track races at the then National Stadium (now Marion Jones Sports Complex) and in Cross Country Classics where he was often a top contender.

A dedicated cyclist, Black Samson rode in a total of 34 Cross Countries, his first in 1971, and his most recent in 2013; and he had many Top-10 finishes, including 3 fourth-places. Unfortunately for Glen, his cycling peak came during the dominant years of two legends, Kenrick “The King” Halliday and Alfred Parks, who shared the Cross Country garlands between 1974 and 1979, with Halliday winning four and Parks winning two. Glen’s best finish was second place to Alfred Parks in the 1979 Cross Country. Incidentally, his older brother, Noel “Muscles” Gordon had also placed second ten years earlier in the 1969 Cross Country to champion Rudy Miguel.

After spending a few years in New York, Glen returned to reside in the Jewel about eight years ago. He never complained, but we were aware that he was ailing, reportedly from a spinal problem. He had just turned 65 years in February of this year, and was recovering from recent spinal surgery when he suddenly passed on Tuesday morning.

Viewing of the body will be at Bethany Baptist Church on Cemetery Road from 9:00 – 10:00 a.m. on Friday, May 29; and funeral services will follow at his home at 10:30 a.m.
Rest in peace, and rise in glory, brother Glen “Black Samson” Gordon!