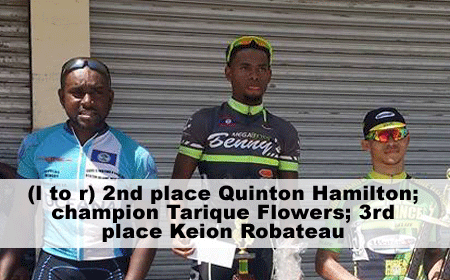 These 11 guys were collaborating on the return to Belize City. At Mile 51, the famous Old Man Hill, Jose Choto continued the attacking, trying to win the prize at the hill top. Choto got the station prize and opened a gap. Tarique Flowers found this to be a threat and again he quickly jumped across to Choto, and the two of them began working together. This new development of a 2-man break-away from the lead group forced certain guys from the remaining 9 to pick up the responsibility of doing the work. Flowers was the only representative from Benny’s, but Jose Choto had his younger brother, the 2012 Cross Country Champion, Geovanni Choto, and teammate Jesmar Guerra sitting in the 9. In cycling terms, we would say that “Geov” Choto and Guerra were getting a “free ride,” at least until Jose Choto and Flowers were caught.

Due to the attacks and sudden changes in the tempo, Zamir Guerra, the last standing representative in the break-away from the Smart Team was left at Mile 50. The peloton caught him 6 miles later, at Mile 44. The chase group of 9 was now 8, and now there was no representation from the Smart Team. This caused major changes in the peloton, forcing the other guys from Smart to now try and get across to the leaders.

When the news of Zamir’s detachment from the leaders got to the Smart Team in the peloton, Brandon Cattouse started the attacking in an effort to bridge the gap. At Roaring Creek, there was a slight separation with Cattouse, Joel Borland and Angel Tzib. These 3 were trying to make it across. Liam Stewart set chase to bring these 3 back, and before the Belmopan airstrip they were caught. At this point, Oscar Quiroz launched an attack, and he was followed by Betram Brown of Westrac Alliance. These two dangled on the road between Chase Group Number 1 and the peloton. At 41, Brandon Cattouse tried again to make his way across; this time he was successful, and hot on his trail was Giovanni Lovell, who pulled his weight equally to get across to Quiroz and Brown. These four, Quiroz and Cattouse of Smart, Brown of Westrac Alliance and Lovell of Digicell-4G now became Chase Number 2.

Chase Number 3 made their way out the peloton at Mile 35. This group consisted of 5 – Kent “Bob” Gabourel and Kenroy “Smokes” Gladden of Kulture Megabytes, Angel Tzib of Westrac Alliance, Richard Santiago of Benny’s Megabytes, and Brandon Morgan of Digicell-4G. These 5 caught Chase Number 2 at Mile 33. This new development now made up Chase Number 2, consisting of 9 cyclists.

At Mile 25, Chase Number 1 was 1 minute and 20 seconds behind the leaders. Chase Number 2 was 5 minutes and 48 seconds behind the leaders, and 4 minutes and 28 seconds behind Chase Number 1. However, in Chase Number 2, the “dead weight” was really holding back the guys from closing the gap; remembering that Smart Team, Quiroz and Cattouse, were the only team not having anyone in the front, which made it clear that they had to work harder than the others to try and close the gap. When Tzib and Gabourel started allowing gaps to form in the pace line, Quiroz and Cattouse started attacking them from the back, and leaving them behind. Both Tzib and Gabourel got dropped, and in the process Brown was also dropped. Chase Number 2 now went from 9 to 5.

During the chase from Chase Number 1, Quinton Hamilton, being the more experienced in the group, talked a lot, and organized the guys as best he could. While this group worked hard to bring back the leading 2, whether it was the distance or speed, Erwin Middleton was dropped, bringing Chase Number 1 down to now 8. At Mile 20, Chase Number 1 caught the leading 2, and at this point, the guys from Imani’s got on the front and turned up the pace.
By Mile 10, Chase Number 1, now consisting of Quiroz, Cattouse, Lovell, Santiago and Gladden (Morgan was dropped at Mile 14), had brought down the time gap to 58 seconds. When the news of the time gap got to the leaders, Jesmar Guerra gave his all, and eventually peeled off from the front. Geovanni Choto was also doing a lot of the pacing.

These 7 guys came all the way into Belize City. As the sprint started, the favourite was obviously Nissan Arana, who is known to be a very fast guy. However, it was between the youngster, Tarique Flowers, and the veteran, Quinton Hamilton, at the tape. Tarique showed no fear, as he tried relentlessly to be the first to cross the line, which he did! Quinton Hamilton settled for 2nd place, Keion Robateau was 3rd, Joslyn Chavarria 4th, and Jose Choto rounded out the top 5. Nissan Arana and Geovanni Choto were 6th and 7th, respectively.

Chase Number 1 came in, and Richard Santiago was the only one who sprinted for the 8th position. Jesmar Guerra was 9th, Kenroy Gladden 10th, Oscar Quiroz 11th, Giovanni Lovell 12th and Brandon Cattouse 13th.

Only 25 cyclists finished the race.