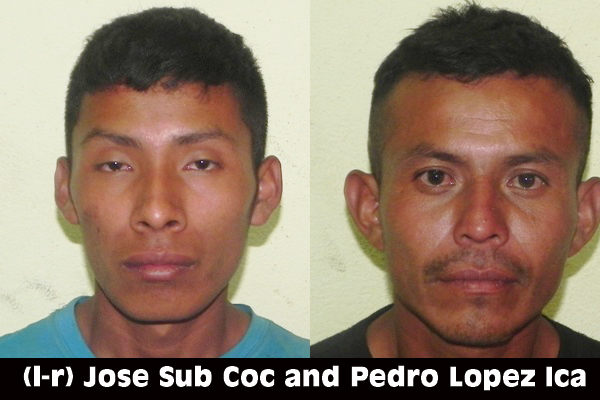 Two armed Guatemalans who illegally entered Belize through the Chiquibul National Park were met by a Belizean composite patrol, who promptly arrested them. The two persons have been taken into custody at the San Ignacio Police Station and were charged with keeping firearms and ammunition without a gun license.

The men, Jose Sub Coc, 21, a Guatemalan farmer of Cah Bom, Alta Vera Paz, and Pedro Lopez Ica, 36, a Guatemala farmer of Monte Los Olivos, were both taken to the San Ignacio Magistrate’s Court today, where they were arraigned on the firearm possession charges. They have since been remanded to the Belize Central Prison until May 30, when they will be returned to court.

The incident occurred about 9:00 a.m. Monday morning in the Chiquibul Forest Reserve. The patrol reported that they saw two Guatemalans, who were armed with a .22 automatic rifle and a 9mm pistol.

The men’s weapons were taken away, after which they were searched. Police found twenty .22 live rounds and fifteen 9mm rounds with them.

They are yet to be charged for illegal entry into Belize.

RUSSIA, Sun. Feb. 10, 2020 (teleSUR)-- The Russian government rejected on Monday the U.S. threats to impose new sanctions against several Russian companies for their cooperation with Venezuela in the oil...
Read more
- Advertisment -