2 robbers jack over 12 grand from A&R 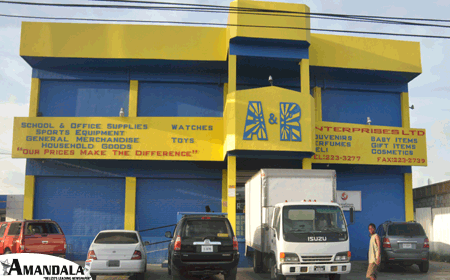 BELIZE CITY—Shortly before 6:30 yesterday evening, a pair of brazen robbers walked up to a security guard at A&R Enterprise Limited, located at Mile 1 ½ on the Philip Goldson Highway, and one of them stood at the door while the other put a handgun to the left side of the guard’s abdomen and ordered him inside of the store.

The bandits then held up the terrified employees and made off with exactly $13,509.31 in cash and items.

The store supervisor reported to police that at about 6:27 p.m., a tall, dark-complexioned man with a stocking over his face entered the establishment behind the store’s security guard with a firearm pointed at the security guard’s left side, while his Hispanic accomplice stood at the entrance of the building.

All the employees were ordered to lie on the floor, while the gunman proceeded to the supervisor’s office, where he managed to steal a plastic bag containing $9,084.66 cash in different denominations.

Thereafter, the employees were targeted, as they were all ordered to the second floor of the store, where the supervisor was then told to open the safe, after which the gunman took two containers, one containing $1,969.65, and another containing $1,225 in cash, which, amounted, when combined with the cash stolen from the supervisor’s office, to a total of $12,279.31, in addition to the other stolen items, valued at $1,230, which were the property of the employees.

After seizing their bounty, the robber ordered all the employees into the office and locked the door before fleeing the scene.

Police are investigating the daring robbery.