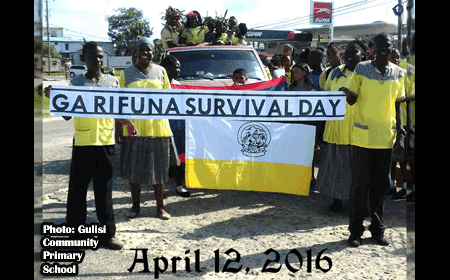 BELIZE CITY, Tues. Apr. 12, 2016–Although the biggest celebration among Belizean Garinagu is observed annually on November 19th, marking their arrival to Dangriga in 1823, there is another historic date which is commemorated among members of the wider Garifuna community—that of 12th April 1797, the date which marks the exile by the British of over 2,000 Garinagu to Roatán, Honduras. Today, the children at Gulisi Community Primary School had a day of activities to mark the occasion.

Unlike the Garinagu’s arrival to Belizean shores, their arrival to what is now known as Honduras, was not as joyous, since those who had made it to that destination had seen almost half of their brothers and sisters perish from starvation and disease on the desolate island of Balliceaux, off the mainland of St. Vincent and the Grenadines, the Caribbean island which is the traditional homeland of the Garinagu. 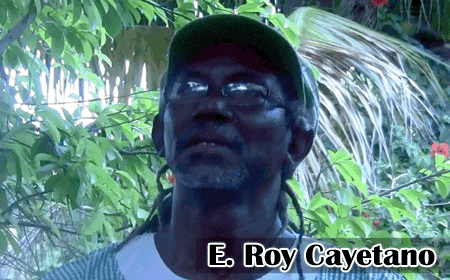 “I believe that it is necessary that we use the occasion, the 12th of April – Arrival Day, to reflect and along with other actors take action to ensure that the Garifuna people continue to survive, continue to serve and continue to be relevant to Belize and Central America beyond the next 219 years with our language, our culture and our spirituality intact,” Cayetano said.
Garifuna priest (buyei), Cannon Jerris Valentine of the Anglican Diocese, also spoke with the press. He said that, “Garifuna spirituality was one of the things that we brought with us…”

He recalled that, “A group of people were sent to Dangriga to civilize the devil-worshiping Garifuna in that community – that’s recorded; that’s written. There have been churches that have excommunicated members, because of Garifuna spirituality… Today, survival should celebrate our survivability from all of these powerful forces.”

“When we reflect on the difficulties our ancestors experienced, it is very clear that the intent was genocide—but of course the British, at that time, were too civilized to just take a gun and kill the survivors, the Balliceux survivors; so they exiled them. We have been here in Central America since 1797; we have been here in Belize from at least 1802,” Cayetano said.

“There was a short stop in Jamaica to provision the ships and then they continued; and on a day like today, the 12th of April, they were dumped on the island of Roatán to fend for themselves,” Cayetano recounted.

Cayetano said that there is documented evidence that five years after that exile, Garinagu had begun to establish their home in parts of what is now known as Belize.

“In case you don’t know why, I expect you know by now,” Cayetano said, adding that, “There are implications for our rights in this country.”

He said that “…the British authorities came with their might—their power and might—to impose their will so they did not ask who owns these lands. It was not enough for them that we were occupying those lands; they came and imposed their narrative on us.”

He pointed to the first map of Barranco, dated 1892.

“The surveyor was sent to survey the village. He first mapped what he found then he did his survey and superimposed that on the plan that they found. You had survey lines passing through people’s kitchens and beds… It was like saying, ‘we are here to arrange you,’” Cayetano said.

He said that the Garinagu are indigenous people with an indigenous mentality who believe that the air and water are for all of us, and the land is for our use and enjoyment. 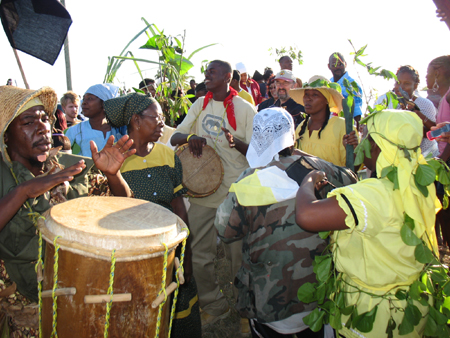 “That is how we were organized; they came and imposed their will on us and we had no choice,” he said.

Against the backdrop of the atrocities committed by the British against the Garinagu, we asked Cayetano whether there is any effort to seek reparations, especially in the context of a wider movement by CARICOM to seek reparations for Afro-descendants across the region. The Garifuna community first discussed reparations in 1993, when the Chülühadiwa monument was established in Dangriga to memorialize struggles and triumphs of the Garinagu. However, the Garifuna nation does not have the resources to go for it on its own. Cayetano said that the Garifuna community fully supports the reparations initiative being pursued by CARICOM and perhaps it can piggy-back on that initiative, since the Garinagu and the NGC are not in a position to mount an imitative on its own.

On a smaller scale the Caribbean Court of Justice last year awarded $300,000 in reparations to the Toledo Maya, to implement a system in Belize for the formal recognition and demarcation of their land. There have also been suggestions that the Garinagu, who also assert indigenous land rights, should launch a similar effort.

“In relation to the Mayas, we have long said that our claims are complementary,” Cayetano said.

He said that the Mayas were an inland and the Garifuna a coastal people, but recently, during the last 30-40 years, he said, the Maya have moved aggressively to the coast — even claiming land at the Sarstoon Temash National Park which, he said, is essentially land belonging to Barranco, his home village. According to Cayetano, the Maya village of Midway was established on farmland for Barranco Village.

Cayetano said that the Garifuna community should have registered its interest as an interested party in the Toledo Maya land rights litigation, but unfortunately it didn’t.

He added that two recent rulings by OAS Inter-American Court of Justice based in Costa Rica, in a case brought by OFRANEH, The Black Fraternal Organization of Honduras, have implications for Belize, which is a member of the OAS.

He urged Garifuna leaders to put together a paper to represent the position of the Garinagu to the recently established Toledo Maya Lands Commission, which has been tasked to implement a ruling of the Caribbean Court of Justice (CCJ) to implement customary land tenure for the Toledo Maya.

Cayetano said that the Garifuna leadership should on the community’s behalf, communicate with the political leaders of Belize to make their presence felt and aspirations known, so that the interests of the Garinagu can be taken into account.

Statement by Roy Cayetano by adeleramosbz