“I know considerably less about the people and events depicted in this book than I would like. Much of the information will never be known …

“The vital statistics of men and women in Belize during the period are almost non-existent. So I made up some of them. Fortunately, I am not a qualified historian and, therefore, not bound by the rigid restrictions of the professional. I am an entertainer and a propagandist.”

“There was also a dispatch from Lord Balcarres in which he said he believed the Caribs recently defeated on St. Vincent would be sent to Belize Town. The men, reputed to be fierce fighters, should be used in the defence of the Settlement. To this end he was sending uniforms for them.

“By the 15th (June, 1797), however, the Magistrates and many others were in a state of alarum again. News had arrived from the Shore that the British had left five thousand Caribs, men, women and children, on the deserted island of Roatan. There was real fear that the Caribs would join the Spanish army to attack the Settlement.”

The use of history for socio-political purposes in Belize has begun anew with the recent formation of a Belize History Association (BHA) under the umbrella of the National Institute of Culture and History (NICH), which is itself under the umbrella of the Tourism Ministry. The newspaper of the ruling UDP, The Guardian, reported in its issue last weekend that the executive board of the new BHA met on June 26; that they will hold a meeting at the George Price Center for Peace and Development in Belmopan on August 2; and that “the first involvement of the History Association will be a lecture and panel discussion on the Battle of St. George’s Caye at the Bliss Centre for the Performing Arts in Belize City on September 3, 2014.”

There used to be a Belize Historical Association around these parts, you know. The official patron was the Governor-General of Belize, and the extremely low-profile organization essentially served as a vehicle for the pro-Baymen, pro-Battle of St. George’s Caye views of a white American who had become a naturalized Belizean – the late Emory King.

One of the most curious and intriguing aspects of Belizean life in the second half of the twentiethcentury was the close relationship between the said Mr. King and the late Rt. Hon. George C. Price, who was First Minister, Premier, and then Prime Minister of Belize from 1961 to 1984, and Prime Minister again between 1989 and 1993. 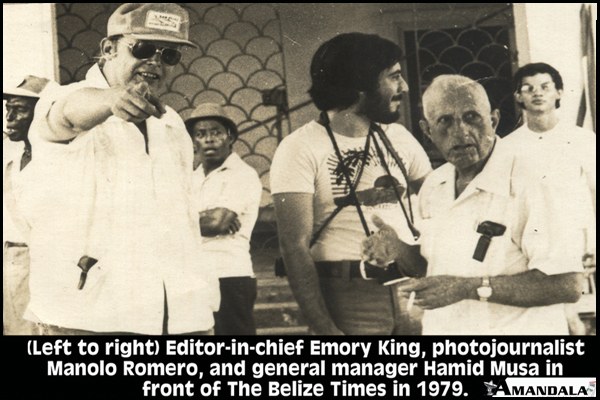 See more FROM THE PUBLISHER articles…

A while after he became PUP Leader in August of 1956, Mr. Price began to raise questions about the authenticity of the colonial reports of events having to do with the September 10, 1798 Battle of St. George’s Caye. The way the British had told the story, black slaves in the settlement of Belize had materially assisted their white Baymen masters in turning back the invasion of a Spanish armada led by Arturo O’Neil, the Irish Captain-General of Mérida, the capital of the Yucatán.

The Spanish rulers of the Yucatán apparently never made any military or naval incursions into Belize after 1798, as they had done several times during the earlier part of the eighteenth century. One reason for peace in the settlement of Belize was that Fr. Miguel Hidalgo began a Mexican war for independence from Spain in 1810. But, conditions for the black slave masses in Belize were not pleasant. There was, for example, a slave revolt in 1820. Slavery was finally abolished here, as in the rest of the British Caribbean, in 1838.

The Battle of St. George’s Caye was first celebrated in British Honduras in 1898, one hundred years after it took place. The Centenary celebrations were organized by Simon Lamb, an employee of the Belize Estate and Produce Company (BEC), the absolutely dominant business corporation in the economics of the colony. The Ex-Servicemen’s rebellion of July 1919, just two decades after Centenary, established conclusively, however, that massive black discontent existed in Belize.

A major factor in the 1919 uprising was Garveyite sentiment in Belize. But after Garvey was arrested in New York City in 1922 and imprisoned in Atlanta State Penitentiary in 1925, his Universal Negro Improvement Association (UNIA) fell into charlatan hands, and a pro-British element began to emerge in Belize. This pro-British element represented the bulk of the opposition to the anti-colonial PUP, which Mr. Price helped to form in 1950 and took over in 1956.

By 1950, Centenary propaganda had reached the stage where the Battle of St. George’s Caye hype was that blacks in Belize had beaten the Spanish from Mexico with “pocono boy” sticks. Whether this had been so or not, the reality in 1950 was that the inhabitants of Belize’s Corozal and Orange Walk Districts were mostly descendants of Maya and Mestizo refugees from the 1847 Caste War in the Yucatán. In Mr. Price’s nationalist analysis, Centenary celebrations had become divisive from an ethnic standpoint. He wanted to de-emphasize the “white man, black man; the master, the slave” working together story, which he said was mythical.

Emory King, a shipwreck from segregationist Florida who landed here around 1952, viewed the Baymen era from a completely different perspective. He saw the white Baymen as great adventurist and entrepreneurial heroes who had built the foundation for the Belizean nation out of wilderness. King saw blacks from a paternalistic viewpoint. We were all right, once we knew our place and behaved accordingly. In Mr. King’s opinion, “slavery in Belize was a family affair,” his reason for this opinion being the fact that white men had been co-habiting here with black and colored women. The fact that black men, for their part, had to watch all this while having to bow to white women as if they were goddesses, was irrelevant to Mr. Emory. 1798 in Belize was a paradise on earth, according to the loudest voice in the Belize Historical Association, an organization blessed by the official representation of Queen Elizabeth II.

Now then, it came to pass that by late 1977 Mr. Price’s ruling PUP was in big trouble. He had incorporated two young socialist attorneys of Palestinian descent, Assad Shoman and Said Musa, in his government a few years previously. Not only was there a serious anti-communist energy coming out of the business community as a result of Shoman/Musa, a right wing element in Mr. Price’s Cabinet was very unhappy. The PUP’s “Dynamic Nine” disaster in the Belize City Council election of December 1977 convinced Mr. Price he had to act. He brought in Emory King, a 100 percent free market capitalist and known to be such by the whole of Belize, to edit The Belize Times, the PUP newspaper. Whatever Emory did, it worked: the underdog PUP won the critical general election of 1979.

At the time of the 1919 uprising, the Price family was considered “Belize white,” if we are to use the rioters’ treatment of Mr. Price’s dad, William Cadle Price, as a guideline. When Mr. Price went to study in a Roman Catholic seminary in Mississippi in the late 1930s, however, that seminary was a black one. In other words, Mr. Price was not considered white in Mississippi. During his political life in Belize after that, Mr. Price was known to be comfortable with roots black Belizeans, and he was very popular with them. Roots black Belizeans, to a great extent, supported Mr. Price when he suggested that the 1798 Battle was a myth.

Emory King’s most troubling contribution to the 1798 debate is what he personally describes as a “Novel History of Belize” he wrote in 1991 and called Belize, 1798: The Road to Glory. In the Introduction to this historical novel, Mr. King admitted that he made up stuff. To my mind, some of this material, never heard of before in Belize, has become accepted history in the last two decades. Amazing, simply amazing.