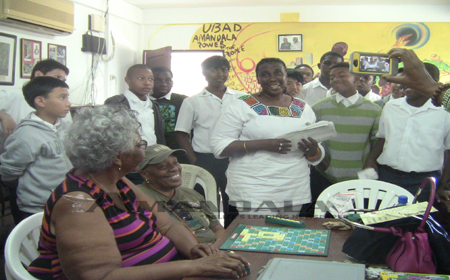 BELIZE CITY, Mon. Feb. 29, 2016–On February 26th at the Library of African and Indian and Studies located at 3304 Partridge Street on the Kremandala Compound, the UBAD Educational Foundation (UEF) hosted a 6 hour-long celebration of the 47th anniversary of the inception of the United Black Association for Development (UBAD), the 16th year anniversary of the opening of the Library, and the end of Black History Month.

From 1:00pm to 7:00pm the organizers opened the door to the public to share the space, UEF programming, the history of UBAD and UEF and to facilitate discussion. Participants included community members from educational and from activist backgrounds. In attendance were students from local schools; recently graduated youth; former UBAD officer and breast-feeding consultant Penelope Casasola; Principal Librarian Joy Ysaguirre from the National Belize Library Services; Felene Cayetano, who heads the National Heritage Library in Belmopan; members of the Belize Coalition for the Human Rights of African Descendants (BCHAD); wise elders including Myrna Pandy, Sandra Kebeh Felix; visiting U.S. educators Phil and Remel Moore; social and environmental activists Candy and George Gonzalez; leadership from Dorothy Menzies Child Care Center; Amandala assistant editor Adele Ramos; Sean Taegar, poet and younger son of Dr. Leroy Taegar, for whom the Library’s Institute of Learning is named; Tracey Flores from RESTORE Belize; media partners and others. Assata Marin, a volunteer at the Library, helped with preparations for the day.

At 1:30pm 45 students arrived from the St. John’s College (SJC) Art and History Clubs. Almost filling up the small space, they toured the services offered and interacted with the elders present. Because SJC and UEF hold an Art Program every Friday, they have begun to familiarize themselves with the work of the Library. Even so, most, if not all, were visiting the physical Library for the first time. Later, students from the UEF Kwanzaa Club arrived; they meet every first Sunday of the month to play Scrabble as a literacy and numeracy-building game; they also plan events and outings and the annual Kwanzaa Celebration in December. Students from the Lake Independence Library intended to join in celebration of Black History Month but they were not able to travel on Friday and so plans to reschedule a read-out-loud story-telling are in the works.

Throughout the Open House Celebration, visitors read from the bound copies of the Amandala newspaper from 2005, played Scrabble, explored the African- and Indigenous-centered books, the computer system (a collaboration with RESTORE) and a computer donation from Fultec Systems, looked for countries on the large map of Africa, gained some introductory history of UBAD and the Amandala, whose name is inspired by the anti-colonial Xhosa and Zulu chant “Amandla! Ngawethu!” or “Power to the people!” The students alerted the neighbours to this new knowledge by chanting the slogan at the top of their lungs. The importance of the UBAD message to the UEF was constantly stated.

Sister Hanifa Karim, who was not able to attend but sent a message to UEF, explained that back then “UBAD filled a yearning in the hearts of young and old in the society back then…Evan X started teaching Black history from the rostrum and it was ablaze with the enthusiasm of a people coming into a knowledge of self.” 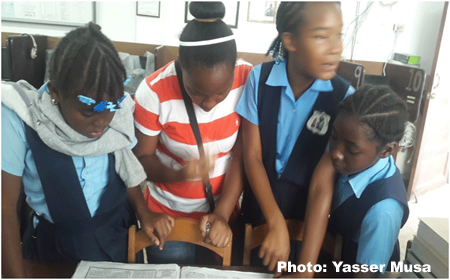 On Friday as YaYa Marin Coleman walked around the crowd of about 30 students between the ages of 6 and 15 she asked them about that same topic: “When you look into the mirror what do you see?” One, a primary school student at the neighbouring St. Martin de Porres said, “I see a Black little girl with a bright future ahead of her.” This comment was met with excitement by youth and adults alike. It is uncommon even in the Library that when doing this exercise students who are of African descent, look upon themselves with self-confidence. The organizers attribute this to a society that encourages people to look away from African and Indigenous models and to look towards European models of beauty and success. And so, they describe a need that Sister Karim said existed almost 50 years ago: a space where local Black and Indigenous heroes are championed as beautiful and worth honouring.

Makeada Marin, who is the Youth Leader of UEF and under the mentorship of the UEF foundational officer, Virginia Echols, said to visitors, “When I was 14 and I joined the Kwanzaa Club and I used to look in the mirror, I never used to see what I see now. I used to think I was an ugly person and that’s what the people at school used to tell me. I used to think that being Black was a bad thing. Right when I joined the Kwanzaa Club is when I learned about all of those things: about Black pride, about being proud of yourself – how to love yourself. And so now, when I look in the mirror instead of seeing an ugly lee girl, I see a beautiful, proud, intelligent woman with more than a bright future because I already have my plans and I know that I will make them happen.” Some responded “Ashe” or, “Let it be so”.

The fruit does not fall far from the tree, as Karim explains that back then, “The truth is that UBAD was an idea whose time had come. All across Belize, black power and “black and proud” were fresh new words on our lips. UBAD, to my mind, provided an alternative to the way of thinking prevalent in our racist society. Hope was kindled in the hearts by the fiery words of Charles X Stamp, X Hyde, Fairweather, Franklin, Poppa Treetop and all those who had the courage to mount the rostrums for change…Slavery and colonialism had crippled our people and I wanted to be part of whatever could help free our minds.” 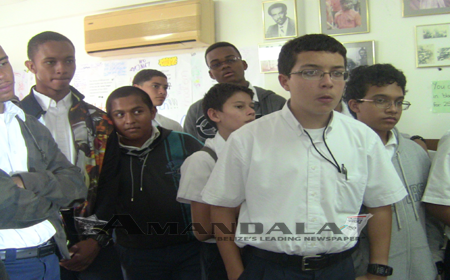 The wisdom of elders and the curiosity of students was evident during the Celebration. Conversation ranged from talking about healthy eating to beautiful sites on the African continent to the history behind the privatization and commodification of water in Belize and the power of people’s resistance.

After lengthy conversations, visitors then ate some of the food donated by family-run Dits Restaurant, Carolyn Tremmel, Cynthia Musulai Pitts, Elvira Edmondson, Esli Abigail Hernandez and Audrey Matura, who is a major supporter during UEF activities. Before breaking bread, YaYa Marin Coleman opened with an African practice of saying libations, explaining that UEF maintains a space that does not espouse any particular religious dogma, but acknowledges the Creator and explores spiritual practices with African and Indigenous roots.
At the end of the Open House Celebration, Glen Martinez Logan from Peini/Punta Gorda shared his appreciation for the day and for the space, “It is a venue for activities that build awareness and education in our African and Indigenous youth about the injustices and imbalances that we are faced with in the world. We need these so our youth can be stronger and better prepared to deal with the types of prejudices and racism that still exist. It felt like a family function to me where you have African and Indigenous people coming together where they don’t experience the normal prejudice according to the colour of their skin or the texture of their hair that they would experience in other spaces. We need to have spaces like this across the country”
In concluding, UEF Chairperson YaYa Marin Coleman commented that the day was “a true and seamless exchange between the different generations. There were youth, adults and elders coming together and reasoning about what is relevant. The students kept saying that they did not want to leave and that they wished that their schools would have teachers with this energy and perspective. It was such a powerful event— it should be held quarterly.”

A majority volunteer operation, visitors also offered advice for some useful changes and renovations that would allow for more programming. One student rightfully pointed to the urgent need for more audio materials. Up on the wall was a wish-list including book titles, an air-conditioning unit, audio books, steel bookshelves, soft seating and other items. UEF encourages community participation, invites organizations to partner, and calls on entities to donate when possible. Perhaps, ultimately, an independent school whose curriculum is based on models of autonomy for African and Indigenous people would be a meaningful next step for the UBAD Educational Foundation.