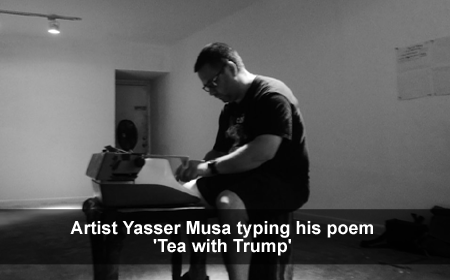 You, Mr. Donald
Paying tribute at the Hermitage in Jackson,
Mississippi
I know you would want to go back in time
To the Civil War
What the intellectuals call the crossroads
Of the American being
And make a deal
To slave or not to slave
Cut this land, cut this body
This American dream born in red native blood
Built with black bodies
White wretchedness planted across plains and
Deltas,

For the past four years artist Katie Usher has been opening and sustaining, for two weeks in July, her “Lab”, a space inside the Image Factory Art Foundation open for artists to create new work and experiment with their imaginations and have it documented and published on the Image Factory website.

The “Lab” is a generative and open process. Usher puts out an open call for artists to come and create and the artists have come, creating a wide range of art that challenges and pleases. Katie Usher’s “Lab” is an oasis of imaginative thought, a supportive space for art creation and a window into the contemporary moment of art in Belize from painting to performances, from poetry to song, from video to visions, Katie Usher’s “Lab”, like the rings of a tree, has grown and developed and enriched the cultural space in Belize.

The “Lab” entries from different artists are open to the public to view and experience and on Thursday, 20 July, artist Yasser Musa treated his audience to an immersive, three dimensional, multimedia experience with the launch of his poem, “Tea with Trump”. Entering the cool, dimly-lit gallery space, Chinese flute music filling the air created a serene atmosphere of calm and Zen, an antidote to chaos. Musa greeted his audience and welcomed us to enjoy the space carefully and thoughtfully laid out with tea of various types with hot water and cups, a set of chairs set in a semi-circle with pastries and plants dotting the space. At the front of the room Musa typed comments from the audience about United States President Donald Trump and read his poem “Tea with Trump”, a fiery response to the constant bombardment of Donald Trump’s fear rhetoric and media blitz that Yasser started to compose on the night Donald Trump was elected President of the United States of America. And indeed his reading was full of fire, an artist’s and poet’s view of what he says is the “flattening of the thought space of the world with fear.” “Tea with Trump” is Musa’s answer to Trump’s venom, the creation of his own space for thought to flow and be nurtured. 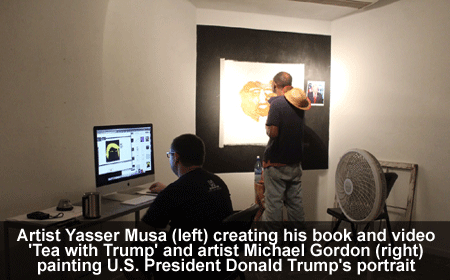 This “Lab” entry is a view into an artist’s creative process, an artist’s and poet’s conversation with himself and understanding the world he sees, making sense of chaos and making a space of peace. At the completion of the reading Musa edited the video he created for the poem with his computer set up in the space and screened it on the gallery wall, a visual work of art and poetry that echoes and advances his “Belize City Poem”, published in July 1996 and which was accompanied with a video by journalist and videographer Jules Vasquez. 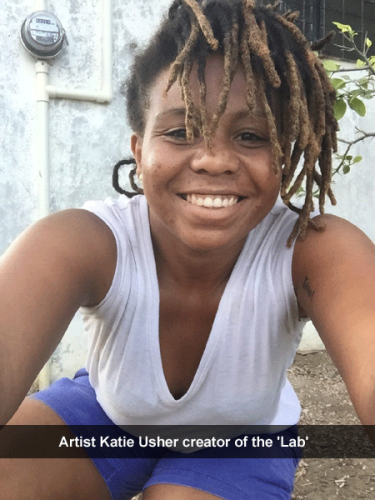 This merging of media which Musa uses as technology advances and his imagination journeys the world he lives in, is the artist’s dynamic process. In addition to the video posted on the Image Factory Website, “Tea with Trump” was launched online as a PDF book that Musa also composed during this lab process adorned with a masterful portrait of Donald Trump by artist Michael Gordon, whose visual mind was in full flight painting the president’s portrait with his honest eye for the character of the subjects he paints.  Both the video and the PDF book are available for free download on the Image Factory website www.imagefactorybelize.com. 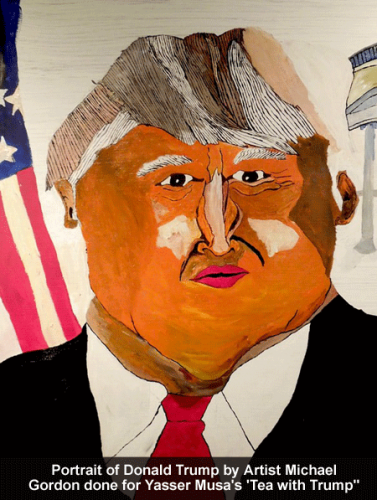 This “Lab” process, this space within a space, like the concentric rings of an aging tree, developing depth and strength, generating space, growing from the center of artist’s Katie Usher’s thought and imagination, creating culture, inviting us to freedom and light.