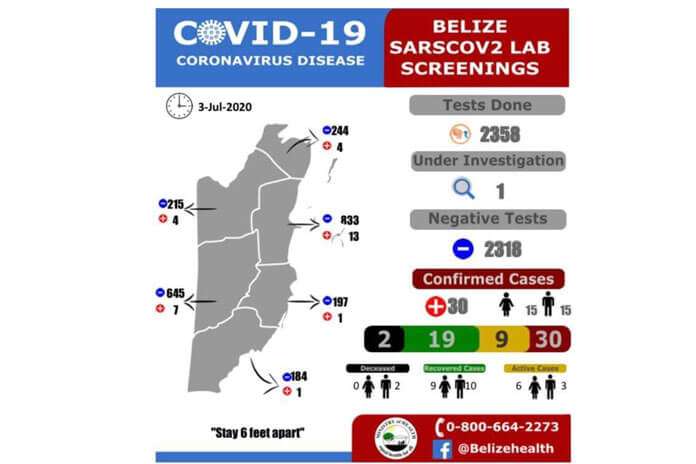 BELIZE CITY, Mon. July 6, 2020– On March 23, 2020, Belize identified its first case of COVID-19, an unidentified woman of San Pedro, and ever since then, the nation’s government and health services have been on full alert.

The island of San Pedro was put under quarantine, and when other cases were found in the Belize, Cayo, and Corozal Districts, the entire nation was put under near total lockdown for the entire month of April. The efforts were successful; in the first wave of the disease in Belize, there were only 18 cases, and 2 unfortunate deaths.

After the last 4 cases were reported, bringing the total to 18, a total of 53 days passed before a 19th case was identified on June 5 — a 27-year-old man who was under mandatory quarantine after arriving home on a cruise ship on which he had been working.

Since then, there have been more cases, mostly asymptomatic, and there has been no community spread. The cases recorded have all been of Belizeans returning home in the repatriation exercise, and Belizeans and foreigners illegally crossing over the borders.

Slowly, however, the number of cases has been rising, and on July 3, the Office of Director of Health Services announced that we were up to 30 cases, after 2 cases from a batch of 77 samples turned up positive. These latest two cases were Belizeans, a male and female, who were caught entering the border illegally at La Union in the Orange Walk District. Both cases are asymptomatic.

The Office of Director of Health Services reported that at this time, we have 9 active cases — 8 Belizeans and a Honduran who are under quarantine. The report said, “now more than ever, we need to continue to stress the relevance of all the prevention measures and we continue to underscore the importance and relevance of working along with the authorities in the identification of those crossing the border illegally (to prevent) a second wave and community spread.”

Belize is getting assistance from several other countries in this fight against the deadly virus. On July 1, H.E. Remus Li-Kuo Chen, Ambassador of the Republic of China (Taiwan) to Belize, handed over 5,000 test kits (COVID-19 antibody rapid test kits) to the Ministry of Health. Previous to that, Taiwan had donated 640,000 surgical masks, 6 thermal imaging cameras, 10,000 N-95 masks, 700 infrared forehead thermometers, 2,000 protective clothing, 4,000 isolation gowns, 2 automated temperature measurement systems, 10,000 nasal swabs and 5 ventilators, in addition to PCR Analyzers, PCR test kits, and some financial support they had given before.

The British High Commissioner to Belize, Claire Evans, OBE, said that the UK government is “committed to supporting our Belizean friends and partners through this global crisis”. Canada’s High Commissioner to Belize, Rita Rudaitis-Renaud, said that Canada “is committed to remaining a strong partner to Belize in these uncertain times”; and PAHO/WHO representative, Dr. Noreen Jack, said that they are “grateful to be collaborating with the United Kingdom and Canada in providing continued support to the Ministry of Health.”