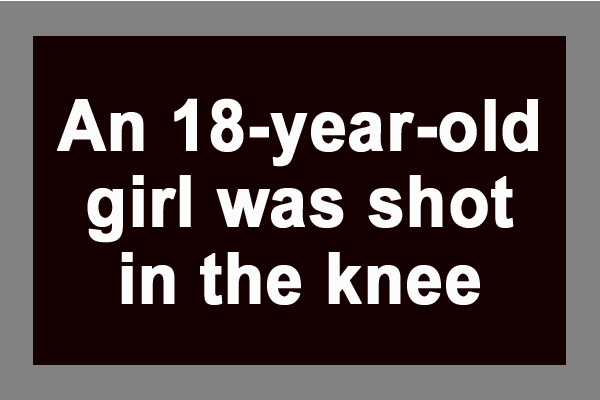 Three persons from the North Creek area escaped a vicious gunfire attack by two gunmen that almost took their lives while they were looking at a basketball game at a court on North Creek Road at about 8:30 last night, Sunday.

An 18-year-old girl of Dolphin Street, a 4th form student of Gwen Liz High School, was shot in the right knee. They were all rushed to the Karl Heusner Memorial Hospital, where they were admitted, treated and later released.

The three victims, Justin Orellano, Kenyon Moss, and the female student were all rushed to the Karl Heusner Memorial Hospital by a neighbor.

Peters said that he was pleased with the quick response of the police, who came shortly after the shooting, but by the time they arrived the three victims had already been taken to the hospital.

The irate resident said that at the time of the attack, there were many children playing by the court, and in the area, who could have been killed.

Police said that Orellano, Moss and the female student were sitting on a car parked on the basketball court when the shooting occurred. The court only has one rim, and the car was parked at the other end of the court.

Two bullets went into the body of Peters’ car, and two shots went through his window and into his bedroom.

Peters said that this was not the first time that gunmen had fired shots in the area, but the target of the attackers is not yet known.

Peters also noted that the shooting occurred less than a year after his son, Wilfred Peters III, was murdered when he was shot multiple times in his house in the Antelope Street Extension Area.

Three men were held by police, but were later released because no witnesses would step up to give statements and to ensure a conviction of the men in court. The men have been released and are now threatening certain individuals, said Peters, who wistfully stated that the family did not receive justice for the death of their son. He calls on people who know what happened to cooperate with police, make a statement and attend court to ensure that the killers pay for their crime.