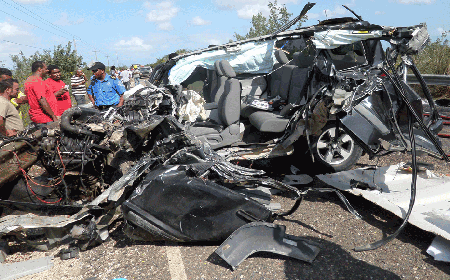 MILE 11, George Price Highway, Belize District, Thurs. Mar. 17, 2016 –Three vehicles were involved in a road collision at about 1:30 this afternoon at Mile 11 on the George Price Highway, Belize District. A Toyota Prado slammed into the left front portion of a dump truck and an ambulance that was travelling behind the dump truck slammed into the rear of the truck.

The Prado was severely damaged. Two persons who were travelling in the Prado were thrown out and landed in the water in a creek near the road. They were seriously injured, and were assisted by rescuers and taken to the Karl Heusner Memorial Hospital by a BERT ambulance.

Amandala was told that the heads of the man and the woman in the Prado were swollen. The man’s chest was bleeding and he was not moving, while the woman was in extreme pain, but she was moving.

A truck driver who saw what happened told Amandala that the Prado was travelling from Belize City towards Belmopan, but the driver lost control and hit the oncoming dump truck, which slammed into the right side of the guard rail, which stopped it from going into the creek.

The top of the Prado was torn off, and there were bits and chunks of the engine and vehicle body parts on the road, including the spring blades of the dump truck.

Many believe it was an Easter miracle that the two persons travelling in the Prado survived the terrible collision, and were not killed immediately.

Traffic on the George Price Highway came to a standstill and was backed up for about two miles either way of the collision scene.

Traffic was cleared at about 3:30 this afternoon when the police recovery truck removed the extensively damaged Prado.

So far, no Notice of Intended Prosecution (NIP) has yet been issued.

All victims were taken to the KHMH.