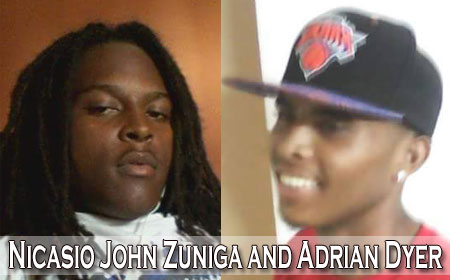 BELIZE CITY, Mon. Sept. 5, 2016–Breaking news tonight is that Nicascio John Zuniga, 21, was gunned down at around 7 p.m. tonight, Monday, on Administrative Drive, located in front of the Charles B. Hyde Complex Building in Lake Independence.

According to sources close to the Zuniga family, the victim had just gone to Ying Ying Shop and was making his way back home when he was shot once in the head.
Zuniga died almost immediately. It is unclear what mode of transportation his attacker used to flee the crime scene.

Community members tonight revealed to Amandala that while Zuniga lived in territory claimed by the Backa Lands Crips (BLC), he was not a troublesome youth.
When Amandala arrived on the scene, Zuniga’s blood was still lying in pools across the street.

A few minutes later, Amandala confirmed that there was another shooting on Racecourse Street, near Sunny and Tan Bakery.

Adrian Dyer, 23, who lives on George Street but is also not known as a troublesome youth, came under fire and was immediately rushed to the Karl Heusner Memorial Hospital, and at this time is in surgery.

Residents near Banak and Lakeview Streets told Amandala that shortly after 7 p.m., there were several shots fired in the area, but no one had been injured.

At this time, information on the circumstances surrounding these incidents is sketchy, but it is expected that by tomorrow, Tuesday, more information will become available.

Approximately two hours after the first two shootings, sometime after 9 p.m., police reportedly responded to a shooting on George Street. However, no injuries were reported, and no one has been detained.

Then about an hour later, at 10:15 p.m., police responded to a shooting near the junction of Victoria Street and New Road, where they found one John Orosco suffering from a gunshot wound in his right hand. He was rushed to the Karl Heusner Memorial Hospital, where, according to information, he has been listed in a stable condition.

Unconfirmed reports are that the alleged shooter, a minor, was intercepted on North Front Street.