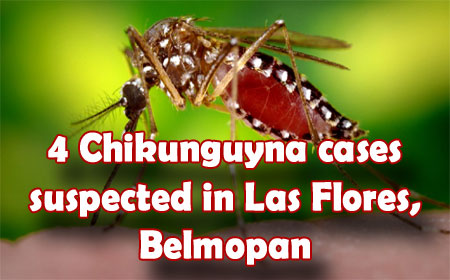 BELMOPAN–The Ministry of Health has confirmed that they are investigating four possible cases of Chikungunya (Chik-V), a debilitating mosquito-borne disease which may appear to be dengue but which causes far more distressing pain.

Those suspected Chik-V cases, all affecting women, have shown up in Las Flores, Belmopan, the migrant community which is home to many nationals from El Salvador, where thousands of cases of the emerging disease have shown up in the recent months. Two of the patients being monitored have told the Ministry of Health they were diagnosed with the disease in El Salvador before coming to Belize.

The first suspected Chik-V case is said to have arrived in the country on Independence Day, September 21, when a 65-year-old woman, who said she had been diagnosed in her home country, El Salvador, came to Belize to visit relatives here.

Since her arrival, three other women, in their 20s and 30s, have reported symptoms suspected to be Chik-V.

Kim Bautista, Chief Operations-Vector Control in the Ministry of Health, told Amandala that there have been telltale signs that Las Flores could be a backdoor for Chik-V to Belize. He said that Health officials drew samples to test a fourth woman today, who had also traveled recently to Salvador and who claimed, just as the 65-year-old woman did, that she had been diagnosed with Chikungunya in El Salvador.

Bautista told Amandala that over the past days, the Ministry of Health has been in contact with these 4 individuals, who are now under lab monitoring.

“Initially, you had a Salvadoran national who came late September and she had related to us that whilst in Salvador she was diagnosed with Chikungunya. She has relatives in Las Flores, so she is visiting Belize. She came well over a month after she was diagnosed [in Salvador] but because Chik-V leaves [patients] with arthritis-type pain for several weeks up to months, her reason for visiting the Western Regional Hospital was to get some medical attention to relieve some of that pain,” Bautista said, adding that the woman visited the hospital late last week.

He said that a blood sample from that patient has been sent to the Caribbean Public Health Agency (CARPHA) in Trinidad and test results are expected back by Friday of this week.

Meanwhile, blood samples from three other patients have been sent to the Central Medical Lab here in Belize City, where preliminary Chik-V screening is done. According to Bautista, the blood drawn from the 65-year-old woman was tested at the lab but the results were inconclusive, and so it has been sent to CARPHA for further testing.

Bautista said that a person with Chik-V can transmit the disease via mosquitos for up to 9 days, starting two days before the onset of fever.

Two other persons from a Las Flores home have reported illness suspected to be Chikungunya, but there is no explanation of how they would have contracted it.

Whereas one person tested positive in a rapid test done at a private lab in Belmopan, another person in the same household, who was not as sick as the person who tested positive, received a negative test result.

Bautista explained that neither the World Health Organization (WHO) nor the US Centers for Disease Control (CDC) recommend rapid tests for Chik-V because their reliability is very low. The blood samples from those persons will therefore first be tested here in Belize, and if necessary at CARPHA in Trinidad, to determine if the persons do have Chik-V.

The fourth patient being monitored had indicated to Health officials that she was diagnosed with Chik-V in Salvador. Confirmatory testing will also be done on her blood samples by the Ministry of Health.

“Earlier today, we had an individual who just like the first lady had traveled to Salvador and she traveled on September 10, 2014. She came back into the country on October 4. When she came back, she wasn’t displaying all the symptoms in terms of fever,” said Bautista.

He said that the woman had visited a private physician in Belmopan, and yesterday she visited the Western Regional Hospital as well.

“She had that joint pain in ankles and wrist and the back and places like that; no fever. Again, she went because of the pain. When we followed up today, she told us that when she was in Salvador, she was also clinically diagnosed with Chickungunya. We also took a blood sample. She has not tested locally,” he added.

Bautista said that there are three communities of interest in the Belmopan area: Las Flores, Salvapan and San Martin. Las Flores has been treated with high priority, Bautista said.

There are even weekly shuttles to Salvador from the Belmopan market area,” he explained, noting that Salvador has been dealing with thousands of cases, but that these have mostly been clinically diagnosed – not confirmed by lab tests.

“In terms of on-the-ground response, we have been in Las Flores, which is typically a high-risk area for even dengue. We have been on the ground conducting public education, fogging, issuing bed nets… almost treating it with high priority, because of too many coincidences over a short period of time,” Bautista told us.

Like dengue, Chik-V is transmitted via the Aedis aegypti and Aedis albopictus mosquitos.

Earlier this month, we told you that the Ministry of Health has had to conduct similar retesting of a patient who had been diagnosed using a rapid test with Chikungunya; however, Health officials said that the patient had not contracted Chikungunya.