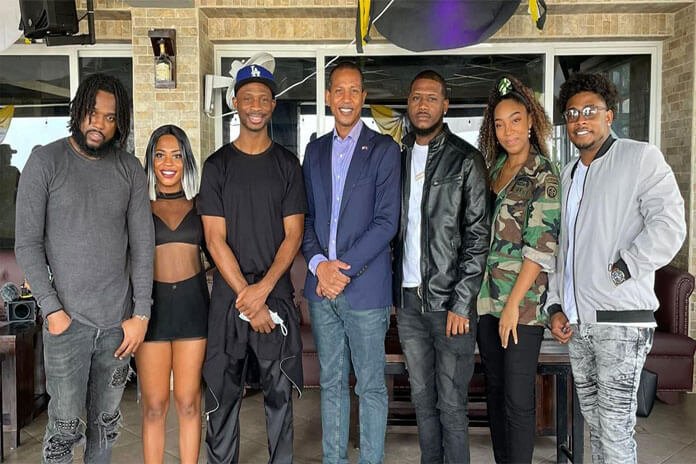 BELIZE CITY, Sat. Nov. 20, 2021 — Today, Saturday, November 20, five well-known Belizean artists have been signed to the largest record label in the world, Universal Music Group (UMG). This event was made possible through the efforts of former Bad Boy Entertainment hip hop artist and ex-Leader of the Opposition, Hon. Moses “Shyne” Barrow, who flew into the country alongside the senior vice president of UMG, Steven Victor, to grant these Belizean artists the opportunity to be a part of one of the most successful global record labels.

Today, Belizean musicians Stig Da Artist, Supa G, TY Musiik, Dajah Glamor and Marlyn Vansen will become label mates alongside a variety of grammy-winning artists. The 5 artists convened at Shisha 8 in Belize City, alongside Hon. Shyne Barrow and Steven Victor to officially enter a recording arrangement through which they will continue to be independent artists — having full ownership of their masters and a majority of any profit made under this partnership.

In a Facebook post, Hon. Shyne Barrow stated, “I’ve been telling Steven about BELIZEAN Musicians for a while, but on my most recent official visits to New York, our conversations intensified, and I appealed to him for his support, given his recent promotion and undeniable status as one of the most powerful executives in the Music Business, in giving established, self contained BELIZEAN Musicians the additional invaluable support that UMG brings to the table.” He said that he and Victor will be acting as mentors to these five artists, guiding them along their musical careers.”

Hon. Moses “Shyne” Barrow, who was Belize’s Music Ambassador under the previous UDP administration, further commented, “I feel obligated to continue to give my BELIZEAN Musicians opportunities similar to the ones I was so fortunate to receive as a young Musician 24 years ago.”