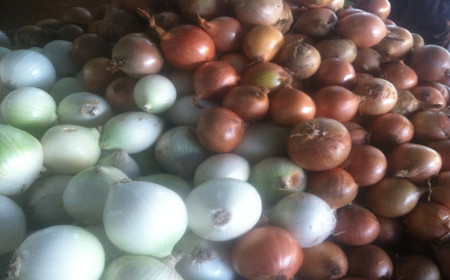 BELIZE CITY–Due to climatic conditions and the lack of proper storage facilities, Belizean producers supply the local market with onions for only part of the year, usually from January to about August. Currently, Belize imports 60,000 pounds of onions a week, mostly from Holland, said Silvero Marin, interim administrator of the Belize Marketing and Development Corporation (BMDC).

Most shoppers like the yellow-skinned onions, and they are purchased at an average size of 50 millimeters by 70 millimeters (roughly 2 to 3 inches) from Holland, where Marin said yellow onions of better quality are available at a good price.

Marin denied reports of a ban against importation of yellow onions from Mexico, where that variety of onions comes in much larger sizes. He said that the larger mauve and white onions are imported from Mexico. Marin said that Mexican prices fluctuate a lot.

Local onions should be available on the market in January, and Marin said that a team from the BMDC and the Ministry of Agriculture should be visiting farmers starting the first week of January to check on the quantity of local production, and also, to get an idea how soon they will be available on the market. This will help them to determine when to stop importing from Holland. Importing will resume when the local supply of yellow onions ends, he explained.

An official at the Ministry of Agriculture informed us last week that they had just approved a request from the BMDC to import 65,000 pounds of onion from Holland.

The Belize Bureau of Standards grants the actual import permit upon receiving approval from the Ministry of Agriculture. The BBS explained to us that there are restrictions on quantity, and Government must consider what is produced on the local market before it decides how much importation to approve.

Officials at the Belize Agricultural Health Authority (BAHA) indicate that they must exercise vigilance to protect the local producers from the importation of diseases that would hamper local production. The imported onions are checked to ensure that they are free from soil, and that they are not infected by nematodes, snails or disease-causing pathogens.