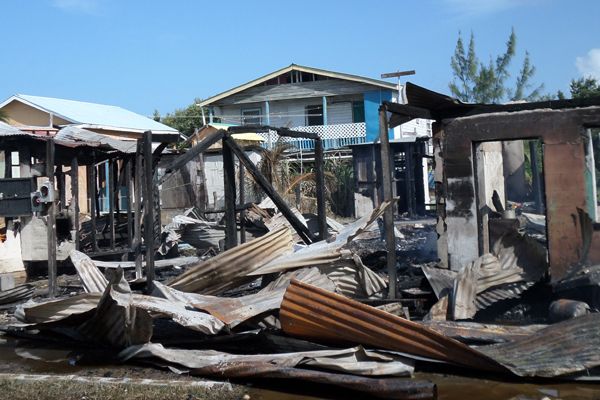 A strong breeze fanned the flames

Sixty-six people, members of thirteen families, are homeless after a massive blaze last night in the Boca Del Rio area of San Pedro burned seven buildings, completely destroying five of them and partially destroying the other two.

The San Pedro Fire Department told Amandala that they responded to a call from police at about 8:30 last night, about a fire on Conch Shell Street, in the Boca Del Rio area of San Pedro. When they arrived at the scene, they saw a building burning.

The firefighters quickly went into action, but strong winds carried the flames to the surrounding buildings, and they became ignited.

The water they carried in their truck was expended in about two minutes, but the firemen quickly accessed water from the lagoon, which was their open source, and they threw water into the area of the blaze. We were told they brought the fire under control in about an hour and 30 minutes, and the fire was completely put out in about two hours.

The fire was said to have begun from the upper flat of a two-flat house that was occupied by a man and his family, comprised of seven members, and it spread to the lower flat, which was concrete, and was occupied by five families.

Marlon Guevara, a resident of the area, said that the firemen had to contend with the wind, but they fought the fire against the wind, and not after it, and so, they saved the block.

Rigoberto Roaches, a homeowner in the area, said that at about 8:30 last night, he was in his house enjoying a movie on his television when he was alerted that a neighbor’s house was burning. He quickly looked out to see what was happening, and saw a man run down the stairs from the upper flat of a house in the area, and he then saw the back portion of the house burning.

Roaches said that the heat was intense, and another building quickly caught fire. He quickly began to throw water on his house to prevent it from burning. A tree became scorched, but luckily, his house did not catch fire. When the fire was put out, some of the victims slept at his house last night.

A resident of the area (who did not want his name known) said that he was at home when he was alerted by a commotion. He firstly thought that it was a fight between the neighbors, but when he came out to see what was happening, he saw his neighbor’s house burning.

He saw his neighbor run upstairs into the house to rescue his children, but they had already been evacuated. His neighbor’s house was filled with smoke, but he went after him and brought him out. His neighbor’s clothes were already catching fire, and he threw water on him to put out the fire.

The resident said that he and his friends went to the lagoon for water, but police barricaded the area, making it difficult to access the burning buildings, and the people became angry.

He said that when the fire truck came afterwards, it threw water for a short while and then the water ran out. He said that two buildings caught fire almost immediately when the firemen rolled up their hoses to relocate to get water from the lagoon. They then went to the lagoon and brought water in buckets and other neighbors joined them and a fire brigade was formed.

He said that because the fire was burning quickly, some of the people did not have time to save their belongings. He also said that the fire service was unprepared, because the small truck responded instead of the big truck, and the water in it only lasted for about two minutes, after which it ceased operation and relocated to the lagoon; during that time, the fire was burning.

In speaking with Amandala, the victim said that the fire began from outside, and it went into the house, and within 10 minutes the house was destroyed. He said that if the fire had started inside, his family members, who were at home, would have controlled it. He said that there were many allegations as to the cause of the fire, and two men have been detained by police in their investigation.

The man said that they have been given clothes, but his concern is where to sleep tonight, because although their house is still standing, they have been ordered not to go into it, because it is dangerous.

Everett Palacio, a resident of the San Juan area, said that this morning, he and his family came to the area to assist the victims with needed items like clothes and eating utensils, and other items needed to make them comfortable.

This morning, Monday, the San Pedro Town Board, the San Pedro police and the National Emergency Management Organization (NEMO) came to assess the damage and help the victims of the fire.

Superintendent Castellanos said that the San Pedro Police is also assisting in aiding the people. He made a donation of mattresses that were given to the new police barracks and other items to make the victims comfortable, because they were more in need of the items, he said.

The cause of the fire, which burned six 2-storey buildings and a 1-storey house, is not yet known said the Fire Department, and they, along with police, have begun their investigation.
Superintendent Luis Castellanos, Commander of San Pedro Police, said that the residents from whose house the fire was said to have started, were taken to the station to give statements.
In making the tally of the seven buildings burned, fire officials said that the buildings were in close proximity to each other, with about 3 to 8 feet between them. The fire began from the upper flat of a two-flat building owned by Maria Gonzalez, but which was being rented by the families, and adjacent to it was another 2-flat building; the upper flat of the adjacent building had 3 bedrooms, and the lower flat was a warehouse.

In front of these two buildings was a wooden house. On the right side of these three structures were two, 2-flat buildings. One had 4 rooms and the other had 6 rooms – 3 on the upper flat, and 3 on the lower flat. The distance between them was 8 feet.

Across from these five structures were two more buildings. There was a distance of about 6 feet between them. The upper flat, of wood, had 3 rooms and the lower flat was of concrete. It had 4 rooms.

The second building had 3 rooms and 25 % percent of it was destroyed.

The families are now displaced and are seeking shelter with friends. Superintendent Luis Castellanos believes that the victims will be housed in schools and will be taken care of by NEMO and the San Pedro Town Board.