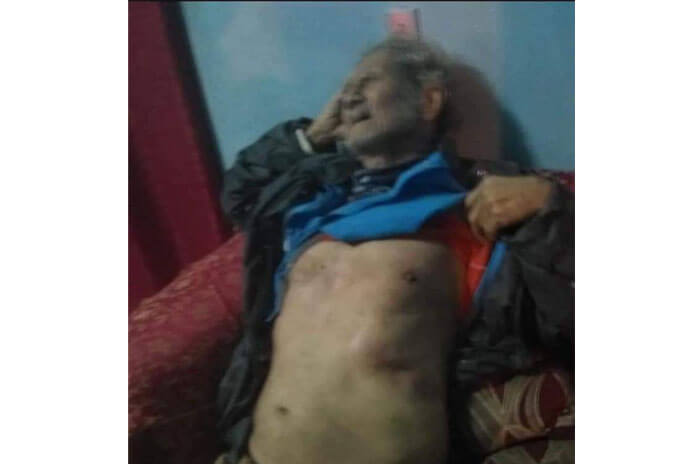 BELMOPAN, Sat. Apr. 4, 2020– Francisco Chavez, 78, a resident of Uruguay Street, San Martin, Belmopan, has been released from the Western Regional Hospital after he was beaten (and allegedly shot) by police who went to his house to arrest some men who had violated the curfew at about 9:00 Friday night.

During the incident, shots were fired, and three men were beaten and arrested.

Francisco Chavez is currently recovering at his house, while Gustavo Pinroy, who was in Chavez’ company at the time the police went to the house, is presently hospitalized due to the injuries he sustained when he was beaten by the police officers.

The three men whom the police had been pursuing were also beaten, then they were arrested. Those three men are Sergio Chan, Mark Chavez (Franciso Chavez’s grandson) and David Nah.

Commissioner of Police, Chester Williams, strongly condemned the brutality and ordered an immediate investigation by the police’s Professional Standards Branch. In a release rejecting the unwarranted violence, the Commissioner said that this is not what the curfew was established to do, that he expects members of the public to obey the rules and cooperate with police, and police are to respect the people, be mindful of their human rights, and treat people with dignity.

According to reports we’ve received, police were on patrol in Belmopan on Friday night to enforce the curfew, and they went to San Martin, where they saw some men walking on the street. The men ran when they saw police, who fired some shots to make them stop.

Only one of the men was arrested, and the other two got away.

Byron Guerra, Francisco Chavez’s grandson, who lives in the same yard in which his grandfather lives and who was at home, told the media that initially, when they heard the gunshots, they came out of their house to see what was happening, and some men who were in the yard jumped over the gate to see who was shot, because one of their family members was not at home.

Police ordered them to go back into the yard, however, and they jumped over the gate and reentered the yard, as the owner of the yard, Francisco Chavez (also known as Don Alejandro), had already locked the gate due to the curfew, and no one was to go out.

He said that when police came back with another patrol, they tried to kick down the gate, and Francisco Chavez came out of his house and asked police why his gate was being broken down.

Police then shot off the padlock, and he was reportedly hit in the arm by a bullet which ricocheted.

Guerra said that his grandfather was kept in the hospital for the night and was released this morning, but he complained of pain in his ribs and arm.

Guerra said that police went to his room and pointed their guns at him, but he asked them not to do so because his young children were present.

The family is angry because they said that the brutality against them was unnecessary, and that they intend to sue police for brutality.