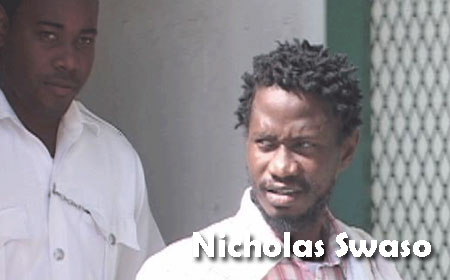 BELIZE CITY, Thurs. Aug. 27, 2015–Supreme Court Justice Adolph Lucas, sitting without a jury, ruled yesterday to acquit Nicholas Swazo, 29, of the October 7, 2011 murder indictment of Mennonite businessman, Windell Reimer, 35, who was gunned down at his hardware store Eagle One, on the Philip Goldson Highway.

Swazo becomes the second person to be acquitted of Reimer’s murder. On August 18, Earnest Staine was acquitted of the murder of Reimer when his attorney, Dean Molina, successfully made a no-case-to- answer submission that Justice Lucas upheld.

In finding Swazo not guilty, Justice Lucas found that the prosecution’s case suffered a key defect in Swazo’s identification.

The Crown’s case, which was presented by Crown Counsel Shanice Lovell, was relying on the surveillance camera identification evidence of Assistant Superintendent of Police Henry Jemmot.

In his ruling, however, Justice Lucas said, “On the whole of the evidence, I am not convinced that Henry Jemmot knew the accused as he stated. It would be unfair of me to convict the accused on his evidence. There is no other evidence for support. In the light of that, I find the accused not guilty.”

The case against the two accused men began on July 20, and in the course of three voir dires, prosecutor Lovell called 17 witnesses to testify.

Superintendent Jemmot was the primary prosecution witness who had identified the accused Swazo from the Eagle One Hardware Store surveillance footage. The footage, however, was not of the best quality, and when it was played in court, it turned out to be against the prosecution’s advantage.

Another key witness in the trial was the hardware store’s cashier, Carmencita Pek. Pek testified that she was not able to identify the accused Swazo.

In her testimony, Pek told the court that three men walked into the hardware store and one of them who was wearing a black shirt inquired if the store sold mufflers. Pek told them that they did not sell the particular one that they had asked about and directed them to go to Universal Hardware.

After stepping outside, the men went back into the store. Pek said she had already gone to sit behind the cash register when the man who was wearing a white T-shirt pointed a gun at her and announced: “Watch ya, robbery! Don’t move or do anything.”

Pek went on to testify that the men went around the counter and opened the cash register.

While the men were taking out the money from the cash register, Reimer walked into the store, said Pek. According to Pek, Reimer ran back through the same door from which he had entered the store. The robber who was holding the pistol pursued him, Pek told the court, and then she heard two shots.

The robbers dashed out of the store, and she did not notice in which direction they had run. She then went to see what had happened to her boss, Pek testified. She said that when she called his name, she did not get any response. He was apparently dead on the spot, where he had fallen.

Swazo, who was defended by attorney Christelle Wilson, had an alibi witness and said that there was no way he could have been involved in the robbery of Eagle One Hardware Store.

Prunella White, Swazo’s common-law wife, testified that he could not have been at the scene of the crime, because he was with her.