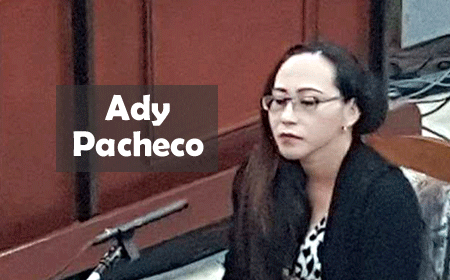 However, she claimed that she was unable to do so because she was at the time pregnant and had experienced a number of complications.

Today, Wednesday, Pacheco sat before the committee, but she would not comment on the Won Hong Kim scandal – which involved Kim, a South Korean national, receiving a Belizean nationality certificate and passport while in a Taiwanese prison.

He had reportedly never set foot in Belize.

According to former Immigration Director Maria Marin, Pacheco had facilitated the issuance of the nationality certificate, which was riddled with irregularities.

Additionally, Pacheco would not comment on the Peter William Dahlstrom case – in reference to which the Auditor General said Dahlstrom, a native of Sweden, received a Belizean nationality certificate that he did not qualify for even though Pacheco claimed he did. Dahlstrom is the brother-in-law of Kim Simplis Barrow, wife of Prime Minister Dean Barrow.

Neither would Pacheco comment on the other many irregularities in which she was named as having some involvement.

That is because when Pacheco appeared before the committee she asked to postpone her appearance.

Her request is laid out in the following quoted exchange between Pacheco and Senator Aldo Salazar:

Senator Aldo Salazar: “I have been communicating with your attorney Mr. [David] Morales since last night and indicated to him that it was the decision of the committee, due to the late hour of your request for a counsel present, that we saw it as your obligation to attend and make any requests for consideration in person before the entire committee. Therefore, we can proceed to entertain, to listen to your request.”

Pacheco: “At this point, I said it to my lawyer that I am willing and will cooperate fully and answer all your questions, but I will do so with his presence, if that’s okay with you …I will answer all questions with my lawyer being present. And if we could reschedule for next week Wednesday, we both will be here.”

Salazar: “He has indicated that he’s available for next week?”

Pacheco: “Yes, he had indicated that.”

Salazar: “We would not compel you to be here without the presence of counsel unless there’s an issue with the presence, of counsel. He’s unable to be here today, and that he will be able to come next week. Therefore, you will be handed a summons for your appearance next week.”

Salazaar: “You’re expected to be here for next week for us to commence at 10 a.m.”

Pacheco: “Thank you very much.”

Salazar: “The clerk will give you the summons.”

With that, Pacheco’ was allowed to leave and former Cabinet Minister, Carlos Perdomo, would subsequently sit in the hot seat for the second consecutive week.

Pacheco’s testimony next week is expected to be as explosive as those of alleged visa agent Barton Middleton, and former Cabinet Minister, Elvin Penner.