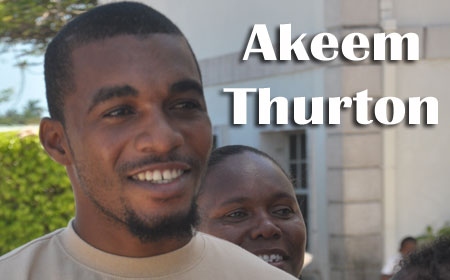 BELIZE CITY, Fri. Mar. 27, 2015–Akeem Thurton, 22, the first defendant in the Belizean court system to be tried by a judge without jury, lost his appeal of his attempted murder conviction. The Court of Appeal did, however, rule to uphold the appeal against his sentence, and the panel of three Appeal Court justices ruled to reduce Thurton’s sentence by six months—the amount of time that he had spent on remand following his arrest for the shooting of attorney Rodwell Williams on May 31, 2010.

On March 15, Thurton’s attempted murder trial ended with Chief Justice Kenneth Benjamin returning a guilty of attempted murder verdict. Thurton was undefended at the trial and the Crown’s case was presented by Director of Public Prosecutions Cheryl-Lynn Vidal.

An American-Jamaican human rights attorney, Nancy Mae Anderson, subsequently learned about Thurton’s conviction and she teamed up with attorney Bryan Neal, and together they filed 20 grounds of appeal against the conviction and consequent 15-year sentence.

The appeal came up last Friday, March 20, when Anderson and Neal appeared in the Court of Appeal before Appeal justices Dennis Morrison, Christopher Blackwell and Samuel Awich.

In handing down today’s judgment, the Court indicated that the reasons for the decision will be given at a later date. It is therefore not known what positions the various judges took on the appeal grounds or which one of the three judges wrote the judgment.

The decision, however, to reduce Thurton’s sentence by 6 months was not the outcome that Thurton and his family members, several of whom were present in court for the decision, had expected.

“The appeal was dismissed on the conviction. The only appeal [that] was allowed was the appeal in respect of his sentence, but only 6 months was removed from his sentence, so effectively he will serve fourteen and a half years by this decision of this court,” attorney Neal, who held brief for Anderson at the sentencing hearing, told reporters.

Neal added, “He was hoping to go home today. The good thing about our legal system is that there is one final opportunity to appeal, so that we have the Caribbean Court of Justice and any person who is dissatisfied with a decision of a court, especially with the Court of Appeal – there is one more chance for him to appeal to the CCJ, so Ms. Anderson and I will be looking at the grounds that we had filed. We will see if we can strengthen those grounds from the Court of Appeal and decide if we have the possibility to mount an appeal from this decision, which is Akeem Thurton’s right to do.”

Neal referred to “The retroactivity of the application of the amendment to the Jury Act – that it should not have applied to him,” adding, “Also, some of the procedural irregularities that we found when we read the transcript. We thought that those were substantial grounds and we put them before the court, but the court is entitled to refuse to accept them, and that is what it has done.”

Neal said that he will be in contact with Anderson and together they will do all that they can do to continue assisting Thurton. They have 21 days from the date of the judgment to file for leave from the Court of Appeal to appeal to the Caribbean Court of Justice.