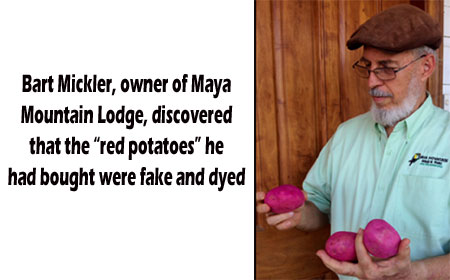 BELIZE CITY, Thurs. Feb. 5, 2015–Belize health authorities have issued an urgent alert, warning consumers not to buy or eat tainted Irish potatoes which have been dyed fuchsia so that sellers can pass them off as red potatoes.

Bart Mickler, owner of Maya Mountain Lodge in San Ignacio, said that he had bought the potatoes for his business, but later discovered that the “red potatoes” he had bought were fake and had been dyed.

“On Tuesday, we purchased what we understood was the new crop of Belizean red potatoes for use at our tourism lodge. When we reached the lodge and they were inspected more carefully, we discovered that they were Mexican contraband white potatoes which had been dyed red with an unknown dye.

Further dialog with other lodges revealed sick guests with these tainted Mexican potatoes as the suspected cause,” Mickler said, in a letter of complaint to Fay Garnett at the Agriculture office at Central Farm.

We had spotted similar “hot pink”-looking potatoes here in the City, and indeed observed that they looked suspect, as red potatoes don’t normally have such a bright, rich color. Garnett told us when we contacted her today that she had passed over the samples of the potato which she had received to the Belize Agriculture Health Authority (BAHA) for analysis, and from what she had observed of them, they did appear to be fake.

Chief Agricultural Officer, Roberto Harrison, who has been leading the investigation for the Ministry of Agriculture, told our newspaper the same, and informed us that the Government of Belize would be putting out an immediate alert this evening. 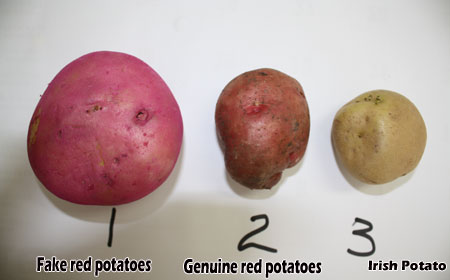 That release, issued jointly by BAHA and the Ministry of Natural Resources and Agriculture, confirms that the strange-looking “red potatoes” are actually tainted Irish potatoes, and although the release says they are sold in San Ignacio, we warn readers that we have also seen these potatoes being sold in Belize City.

“Confiscation of this product has commenced and the public is advised not to purchase or consume these tainted potatoes,” the release continues.

It assures consumers that potatoes produced locally at this time are of the “rouge” variety, which has an earthy reddish skin, and those potatoes are safe to consume.

“It is believed that the tainted potatoes are contraband products that have been dyed to resemble the local produce,” the release further said.

A businessman in San Antonio, Cayo District, has been fingered as involved in the smuggling and illegal alteration of the potatoes. However, we were advised that Belizean authorities are conducting an investigation to determine exactly who is responsible.

Meanwhile, the release adds that, “BAHA is conducting analysis of the product and investigating the possible source of the product to guide further action.”

In his letter to Garnett, Mickler had pleaded that “the public can be made aware as well so that potential poisoning can be avoided.”